Lancaster was only made a city in 1937 but its story can be traced back to the Romans who established their ‘castrum’ or fort by the ‘Lon’ or river Lune.

I am familiar with Lancaster but until very recently had never visited the city Museum, a modest building which one could easily walk past without noticing. It isn’t grand or ornate, but typically of Lancaster buildings it is constructed from stone and blends in with its surroundings. Ironically, it came to my attention on my most recent visit due to the scaffolding, plastic sheeting and forlornness which surrounded it. Thinking it had closed, I carried out a closer inspection, and at the bottom of a polythene walkway found a way in and a warm welcome. There began an hour long exploration of kings and castles; Saxons and stone carvings; industry, craftsmanship, culture and conflict.

This Roman milestone stands in a somewhat incongruous position at the top of the staircase where the chintzy curtains and electrical wires appear at odds with this object of antiquity. It was made during the reign of Emperor Hadrian (builder of the border wall between England and Scotland)  between AD 127 and 138 and informs onlookers that it is four Roman miles to Lancaster from the spot in Caton where it was found in 1803. Here are some more relics of Loncastrum life….

Moving on a few strides and several centuries we find ourselves in Lancaster of the middle ages. There are many examples of Celtic and Saxon crosses in ancient church yards all around England, especially in the north. The two below were found during excavations of Lancaster Priory Church.

Most interesting to me were the informative displays about Lancaster during the industrial revolution, and its development as a centre of stained glass manufacturing. 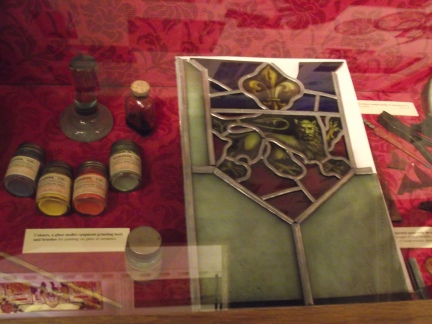 The skill of glass making flourished in Lancaster from about the 1870s in response to the growth in church building and the number of prestigious homes which boasted luxurious stained leaded windows.

James Williamson, Lord Ashton, was a leading industrialist and one-time mayor of the city whose family firm produced linoleum (see my blog on Williamson Park). Some fine examples appear in this display cabinet. A few of these fine specimens have cool retro appeal. Oilcloth and linoleum were big business in Lancaster for over a hundred years from the 1840s until the second world war and at the industry’s height it employed over half of the city’s work force.

Examples of the city’s metal trades are also showcased 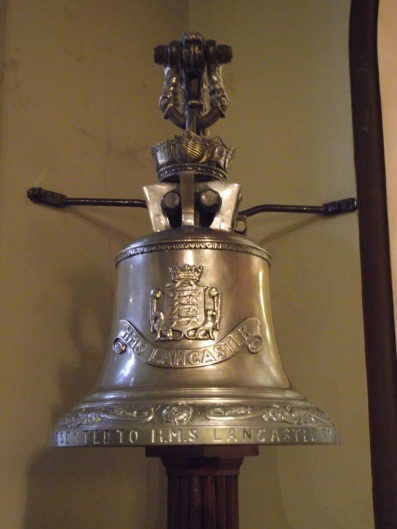 What local museum is complete without a badly turned out mannequin or two…or three…or more…? Lancaster has not fallen short and my particular favourite is the lady below undertaking wash day duties. I have early childhood memories of my own grandma having a dolly tub in her out house, decades after it had seen its last load of laundry.

Lancaster has a proud military history and a section of the Museum celebrates this. I was very interested in looking at the various exhibits which had belonged to real men who had fought in the wars of the 19th and 20th centuries, some who died and others who survived to tell their stories. Some of their personal possessions have been donated by family members still living in the Lancaster area. 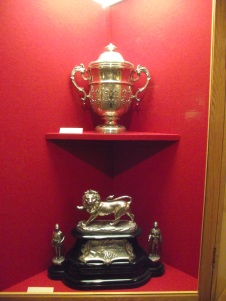 I was fascinated by the fabric and sewing detail on these uniforms and the fact that some of them looked so small, clearly worn by slim soldiers. It’s difficult to gain a sense of the proportions from this photo.

This little museum has no cafe, gift shop or any of the multi-media and interactive attractions we have become used to nowadays, but it’s well worth a look if you’re in the city and want to learn more about the story of Lancaster.