Rain has recently fallen on my part of the world for the first time in four weeks; and very welcome it has been! I love the sun and the heat and have basked and baked under the glorious rays, enjoying each day as it has arrived in all its fiery glory. I have trudged nightly, heavy watering can in hand, across the lawn to quench the thirst of wilting flowers. My little lawn has suffered in the extraordinary heat. Straw-like patches have appeared amid the verdant blades. It is incredible how quickly the lawn has rallied after just three heavy downpours; new growth has already sprung forth, and the dry but cooler weather of the last few days has aided the revival. I eagerly await the return of the intense heat but a (hopefully brief) respite is literally a breath of fresh air.

Lawns. Mine is only small. We Brits love them. We love sitting on them. We love walking barefoot across them. Playing tennis on them is another British pastime. Most of all we seem to love mowing them. All this lawn talk reminded me of a museum I had heard about that is dedicated to that instrument of lawn beautification, the trusty mower. When I first heard about this repository for mechanical grass cutters, I thought it must be a joke. Certainly, these most labour-saving of horticultural contraptions hold pride of place in our garden sheds, but could there really be a museum celebrating their existence? I decided to head to the coastal town of Southport to find out mower (sorry!). 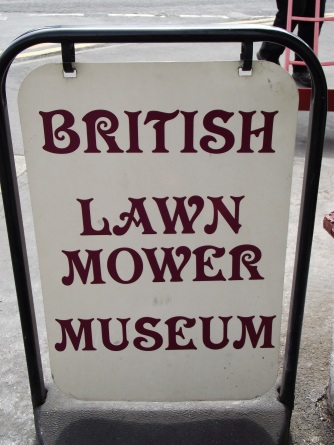 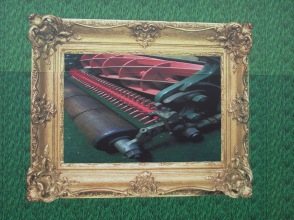 Shakespeare Street, just a short walk outside of the centre of Southport, is quite ordinary except that it is the location of a centre of national gardening heritage, the British Lawnmower Museum This fascinating place was created by owner, Brian Radam, whose family business, Lawnmowerworld, is adjacent. In fact, visitors must go through Lawnmowerworld – a business which specialises in the sale, servicing and repair of all things lawnmower-ish – to enter the Museum. According to its website, ‘The Museum retains a character not often seen in these modern times’; I would not disagree.

I paid my £4.50 entrance fee and passed through the turnstile which separates the shop from the Museum. Brian – curator and business owner – explained that there would be an audio guide which would provide details about some of the many exhibits and about the history of lawnmowers in general. He asked me if I was interested in the devices, and I confessed that I was not, beyond their usefulness in my own garden, but that I was fascinated by the idea of a museum being dedicated to them. Fortunately, Brian didn’t seem to take offence at my frank response.

The audio commentary proved to be very informative, containing lots of interesting details about the invention of the first models and how they were initially dismissed by critics who thought they would never take off! The commentary and the Museum’s website inform that ‘the lawnmower was patented by Edwin Beard Budding in 1830’. At the time, Budding was thought to be insane and ‘had to test the machine at night so no one could see him.’ Needless to say, Brian has the prototype in his collection and was happy to demonstrate to me how it worked. Two men would have been needed to move this revolutionary piece of machinery, so Brian had to multi-task in this demonstration.

Only a fraction of the Museum’s total collection is on display, with the rest being stored away at a secure location. It wouldn’t be possible to show everything. It’s a rare thing to be guided through a museum by a curator. Brian helpfully hovered, powered by enthusiasm, revealing interesting snippets. I learned a lot on my visit, though I have to say that as I’m not mechanically-minded, some of the more technical details went over my head. 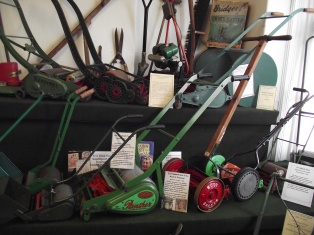 I found the Museum a lot more interesting than I had expected to, and was particularly entertained by the collection of celebrity mowers and devices which the rich and famous have donated. Here are just some of them.

I asked Brian if he contacted celebrities to request their expired devices. I was quite surprised to hear that it was they who contacted him and invited him to their posh pads to collect the aged contraptions. I was particularly amused by an anecdote about Nicholas Parsons who went on to offer Brian not only the mower originally promised but virtually the whole contents of his shed! With all that stuff to get rid of, Nicholas Parsons could have put on the car boot Sale of the Century! (if you were born after 1970 you will have to ‘Google!’)

On one wall, Brian has displayed some photographs of himself meeting celebrities at various events to do with gardens or machinery or when they have visited the Museum.

Brian didn’t mention during our conversation that he is a former racing champion and played down taking part in (and winning) a TV quiz show, various media interviews over many years and participating in other TV programmes and conventions. As a curator, Brian Radam is a cut above (sorry again!) those of most other museums and brings back to life through enthusiasm, knowledge and humour the rusting relics of gardening yesteryear.

12 thoughts on “The British Lawnmower Museum, Southport: gardening habits of royalty and celebrities, a grass-cutting obsessed curator and a lesson in Qualcast mechanics”