Dutch bulb fields have, since the time of ‘tulip mania’ in the 17th century, attracted painters from Europe and beyond, mesmerised by vistas of flowers, row after row, vibrant and tantalising, extending like floral carpets to meet the horizon.

One of my favourite examples is Tulips in Holland by French Impressionist, Claude Monet, painted in 1886.

I am fascinated by the light and the vivid hues, and had pondered the reality and how it compared with Monet’s impressions as he set them to canvas in real time.

The Dutch tulip season is short, beginning in March and ending in May. A short visit to Holland’s southern bulb region last week presented the opportunity to feast my eyes on multitudes of magnificent blooms as Monet did on another spring day over 130 years ago.

The flat land and waterways reminded me of happy childhood holidays cruising on the Norfolk Broads with my family. They are early memories, set in time in a technicolour palette; our sensory perceptions of colour, smell, pain and sounds gradually fade as we grow older. I still remember the boldness of scarlet poppies against the parched East-Anglia fen land and vast sky. Of course, the two regions of England and Holland were once joined, back in the mists of time, so perhaps the connection is understandable.

The landscape changes from week to week as fields are harvested and return to barren soil, their glory days ended for another year.  Elsewhere, new flowers open to the sun as their moment arrives.

I ambled alongside one narrow canal which skirted several smaller fields. Views from the water’s edge offered a chance to see further and to form my solitary impressions. 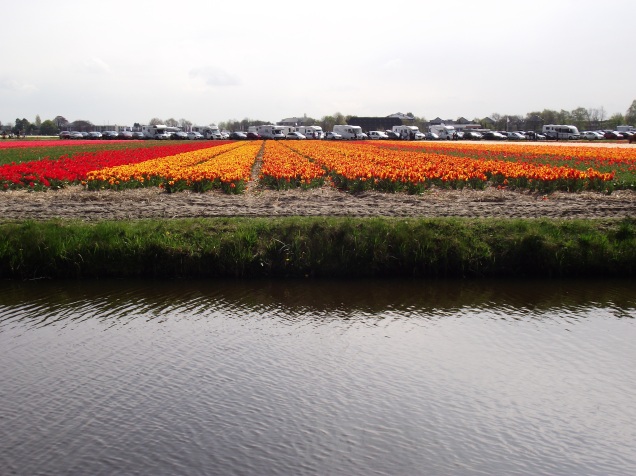 My impression is of a grand artistic collaboration between nature and nurture at its triumphant moment of fruition, and that I was lucky to be in the gallery to see it for myself.

8 thoughts on “Tulip Fields: An Impression”