Yesterday, I visited Shrewsbury for the first time. I had been looking forward to experiencing the olde world charms of this quaint Shropshire city on the Anglo/Welsh border. I was less sure about my choice of conveyance: a good old British coach excursion. I suffer from travel sickness, but it affects me only on some terrains and modes of transport. Coaches and winding country lanes are a very, very bad combination indeed. Having been advised (wrongly!) that the journey would be via motorways and straight A roads, I decided to chance it.

Fast forward from leaving the M6 south of Warrington and along many, many miles of rural Cheshire’s scenic but convoluted lanes; fast forward through the inevitable, fortunately not witnessed by fellow passengers, and  I finally arrived in sunny Shropshire, still green around the gills .

The travel company had arranged for our first views of Shrewsbury to be from the vantage point of the upper deck of Sabrina, a small pleasure craft offering short sails along the river Severn, which separates England and Wales. Sabrina is named after the Celtic river goddess, a name also bestowed in ancient times to the Severn itself. The source of the river is near the town of Llanidloes, mid-Wales. It loops through Shrewsbury, continues into the west country, and eventually on into the Bristol Channel. The Severn is the longest river in the UK – five miles longer than the Thames.

The short wait at Victoria Quay near to the Welsh Bridge provided me with a bit more time to recover in pleasant surroundings from the hellish coach ride.

Rod, our friendly Scottish skipper, told us about some of the points of interest as we sailed first towards the English Bridge. The tree-lined river banks were lush and green on both sides. Interestingly, exactly three hundred Lime trees are sited on the bank. In accordance with a local regulation, if one has to be cut down another must be planted to replace it. Kingfishers frequent this section of the river but unfortunately none appeared for us. The view was lovely, nonetheless. 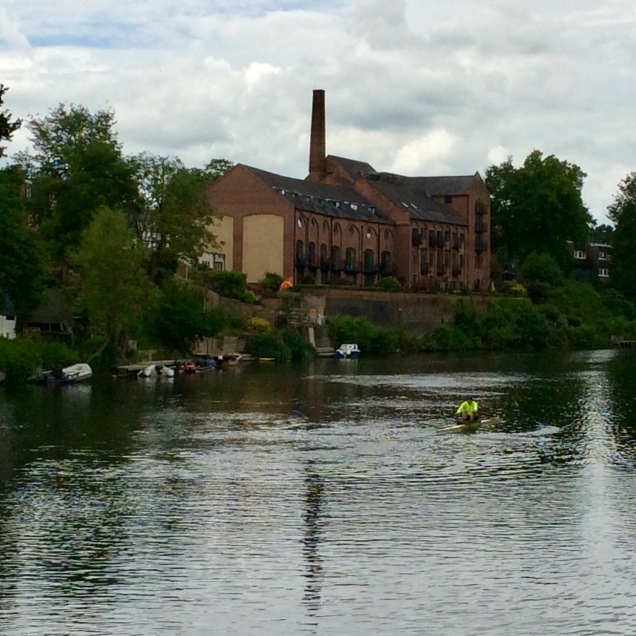 We passed Pengwern Boat Club, Pengwern being an ancient name for the county of Shropshire, dating back to the time when it was a Roman settlement. A small herd of Old English long-horn cows grazed happily as people walked by. The reminders of the border position of this city are all around. According to Rod, the cattle are recruited every year to munch on the lush grass and keep it in check.

People strolled along the bank or sat on the grass, reading or just passing time. An adjacent park appeared to be very popular; through the trees I glimpsed dog walkers, and excited children scurrying up climbing frames. Charles Darwin, a local boy, had spent a lot of his time there ( perhaps pondering the origins of the flora and fauna?) and a garden area has been named after him. Another famous former resident is the font of all gardening knowledge, Percy Thrower. Rod pointed out his former house, which could just be spotted inside the park, but I wasn’t able to get a photo. Percy served as Superintendent of Parks in Shrewsbury before he became well-known.

We arrived at the English Bridge, originally a Norman construction, but rebuilt in 1768 to allow larger boats to pass beneath as Shrewsbury became a more important industrial link between England and Ireland via the port of Bristol.

Here, Rod swung the boat around, and we retraced our route. 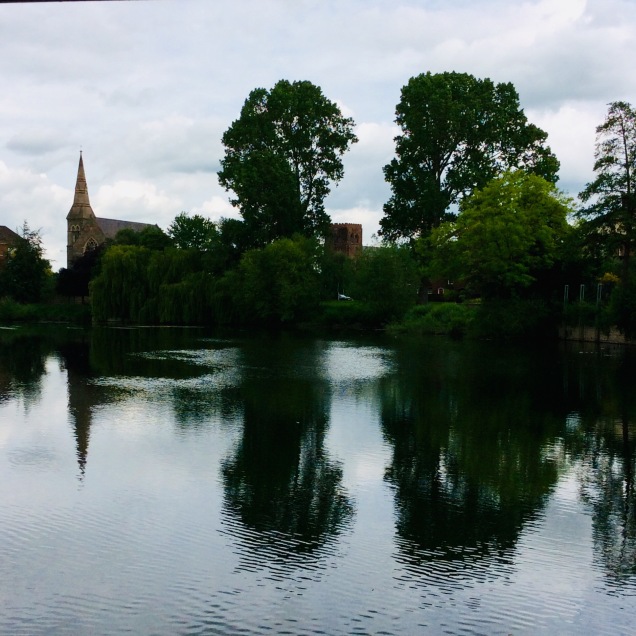 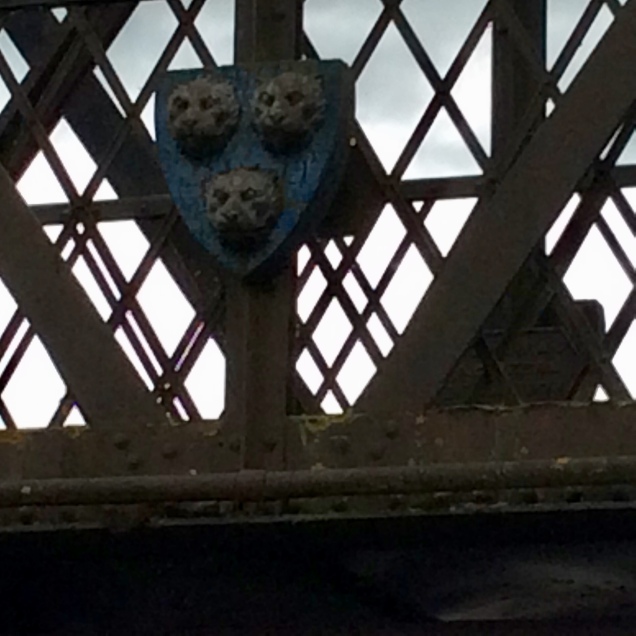 The Kingsland Bridge is privately owned, and originally a toll charge was due from all who crossed it. Nowadays, it’s free to walk across on foot, but drivers must still pay 20p. I spotted the city coat of arms: three sinister-looking leopard heads on a blue background. These are locally known as loggerheads, as in the turtles, though the reason for this is not clear.

We sailed beneath a gorgeous example of early 20th iron work. The Porthill suspension footbridge was built in 1922 at a cost of just over £2000. Its refurbishment a few years ago cost over half a million pounds. 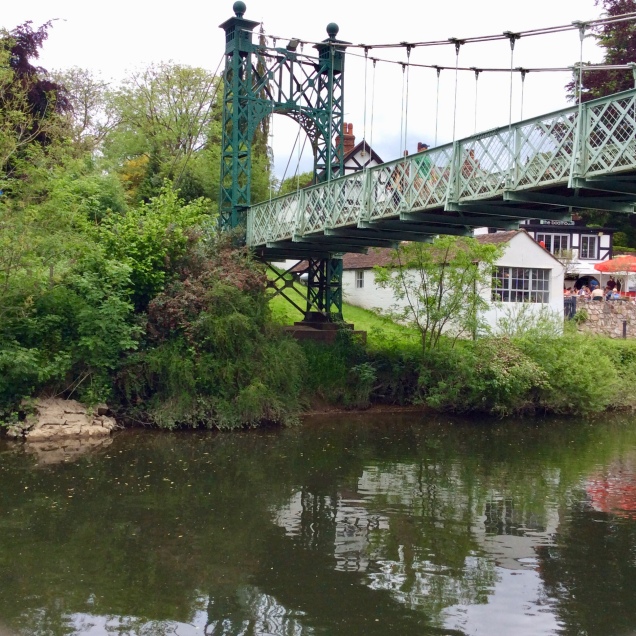 Sabrina arrived back at Victoria Quay and the Welsh Bridge. Originally named St George’s Bridge, it was built between 1793 and 1795 on the site of other river crossings dating back as far as the 12th century. I wasn’t able to get a good shot of the bridge from my viewpoint, so below is one from the internet, which also captures Sabrina at her mooring.

We crossed the bridge into the centre of the city, ready to experience its medieval charms.

7 thoughts on “A short sail on the Severn”