Earlier this month I had the opportunity to look around one of Manchester’s most historic buildings, Chetam’s Library. The 15th century building, attached to the prestigious Chetam’s School of a Music, offers pre-booked guided tours on most days of the year, but this was a bit different. Chetam’s Unscripted was promoted as a chance for visitors to wander unaccompanied and at liberty around the Library after closing time, aided only by torches and fairy lights to guide the way. This is the second year of Unscripted, and as last year’s event sold out very quickly, my cousin and I made sure we secured our places this time around. We were looking forward to the extraordinary opportunity and the promise of ‘surprises’.

The building is next to Manchester Cathedral and dates back to 1421 when it served as home to the clergy of the then collegiate church.  Humphrey Chetam (1580-1653), a successful and very prosperous Manchester textiles merchant, banker and landowner made provision in his will for five parish libraries in Manchester and Bolton which would be accessible to all who wished to use them. There was no equivalent at that time, with formal education being only for the privileged classes. In addition to the church libraries, Humphrey Chetam established the building we stood in front of as a boarding school for 22 boys. Despite his material success, Chetam retained some more humble qualities and was fined for refusing a knighthood.

Once all the visitors had assembled at the security barrier we were escorted inside by a volunteer and greeted by a member of staff whose immense enthusiasm seemed slightly  patronising, as if we were schoolchildren, perhaps her usual audience. It was then explained that we were not in fact allowed to wander around at will and explore every ancient nook and cranny, and that any closed doors were ‘closed for a reason’; there were a lot of closed doors. The event was programmed to run from 6 pm to 8 pm to be followed by wine, mince pies and an opportunity to ask questions. Before we were let loose, we were told that wine would actually be served from 6:45 pm.

Torches guiding the way, we set off excitedly down a stone passageway towards the light emanating from an open door at the end. Clues had been left to suggest the possibility of unworldly encounters to come.

The darkness and magical lights were very atmospheric. Up ahead, shadows moved unexpectedly, the dim lights from other torches revealing the presence of fellow corporeal explorers. In truth, it really was too dark to see much detail, even with the aid of torches, but we were able to pick out some interesting architecture. 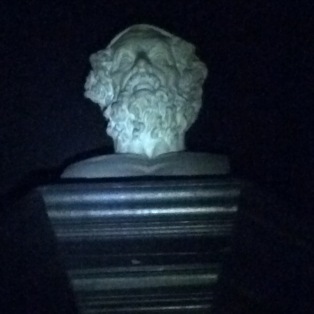 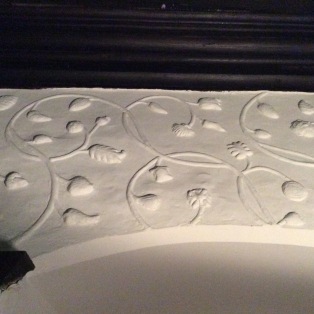 In one of the large rooms we could just about make out the details of some period furniture and spied some old books laid out on a large central table. Due to their age and delicacy it was not possible to touch them, though one of the curators did offer to tell us more about the books if we were interested.

John Dee, a famous character from the court of Queen Elizabeth I, is associated with that very room, but I won’t elaborate here, as I plan to revisit in daylight when I hope to be able to see the exhibits properly.

A flight of creaky oak stairs took us to the library itself, a long gallery with reading areas behind locked iron gates to the left and glass-fronted shelves to the right.  Another volunteer was seated at the top of the staircase in the pitch blackness, her presence only detectable through the torch beam which she shone in our direction. I later heard her telling some other visitors that she sometimes dressed in period costume, which was what we had been expecting really, and would have added to the atmosphere. Nevertheless, this part of the building was the most interesting. Again, we were not allowed to touch any of the books, many of which were clearly very fragile, but it was fascinating to read some of the titles on the battered spines which included volumes on science, natural history and the geography of Lancashire. 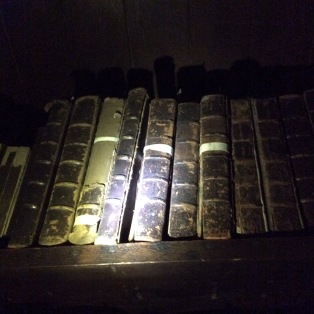 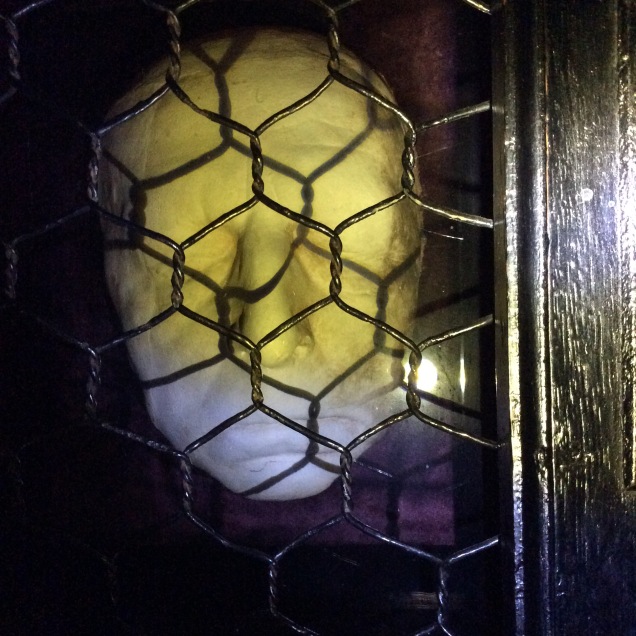 I spotted a pale face inside a cabinet, all the more disturbing in the darkness. I assumed it to be a death mask and this was confirmed by the volunteer. Unfortunately, she couldn’t tell me any more about the owner of the original head, but suggested that Google might be able to help.

At the end of the corridor we found an area which looked to be in use as an office. What a marvellous place to spend your working day!

Retracing our steps, we almost literally bumped into some other people from our party and spent a few moments chatting about what we’d seen – or not seen – so far. We all shared the view that the day time tour would probably be better and that we would definitely be interested in returning in the light.

A very old and elaborately carved door led into another room. 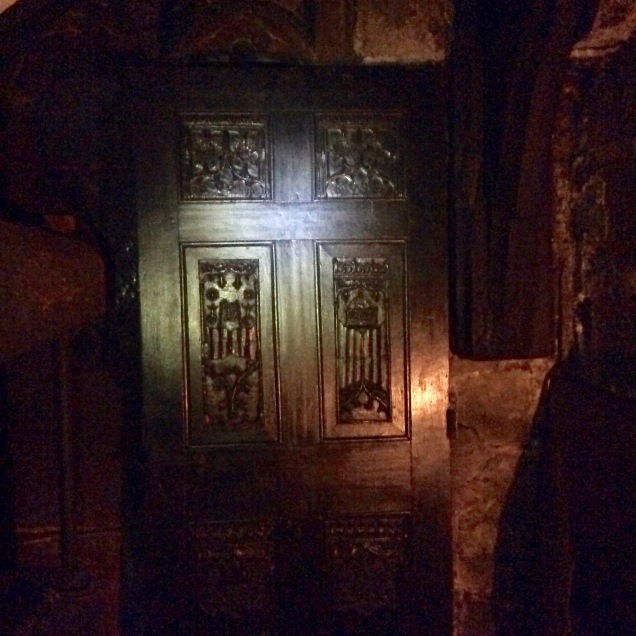 This housed a chained library, a collection of books dating back to the 17th century and one of the original libraries which Humphrey Chetam had planned for five parish churches in the region. As you see in the photographs, each book is attached by a metal chain to the cabinet or library. There were originally four of these libraries (the fifth was never printed) and members of the public could sit at the cabinet, which was usually attached to their church’s pulpit. Whilst not as convenient as the modern lending libraries we enjoy, this provided a great opportunity for individuals to access the written word. In addition to the one below which it already owns, Chetam’s is hoping to purchase a second from a private owner in the near future. Very sadly, the two others are believed to have been destroyed years ago, some of the precious books having been found in second-hand book shops in Manchester. Understandably, we were not allowed to touch those books either, but the curator opened one for us so that we could read a little of the ‘Old English’. In fact, it was not ‘Old English’ at all but the language was of its period and therefore is old-fashioned to the 21st century reader. Perhaps it was presumed we would not understand the difference.

The chained library was, for me, the most interesting exhibit. From there, we took a look inside a tiny room where the school master would have been able to look through a slot in a wooden panel down into the baronial hall to listen in on the school boys gathered below. Today, it houses the visitors’ book and an assortment of pens, some designed to look like quills. 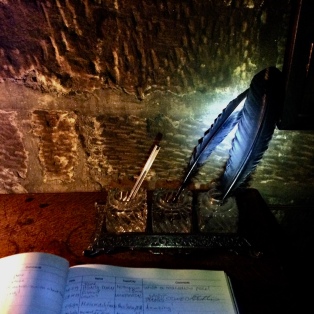 Within an hour we had looked around all the permitted areas and at as much as we were allowed to touch and able to see in the darkness, so it was time for wine in the baronial hall. Mince pies were available but they were not included in the ticket price (£22) and there were no alternative beverages for any tee-teetotallers. None of the staff or volunteers mingled or asked for feedback or if we had any questions, and long before the advertised finish time of 8 pm, all visitors had departed.

Our verdict (shared by those participants we spoke to, though others may have had a different opinion) was that Chetam’s Library is undoubtedly a fascinating place and well worth a visit, but in the day time for the guided tour which costs less than a third of the price of the Unscripted event, and at 45 minutes lasts about as long as it took us to go round, but with the benefit of a person to explain the exhibits. We were expecting much more, as suggested by the advertising, and there were none of the ‘surprises’ we were promised, ghostly or otherwise. Chetam’s is a Manchester gem but it needs the light to bring out the sparkle.

8 thoughts on “After dark at Chetam’s Library”