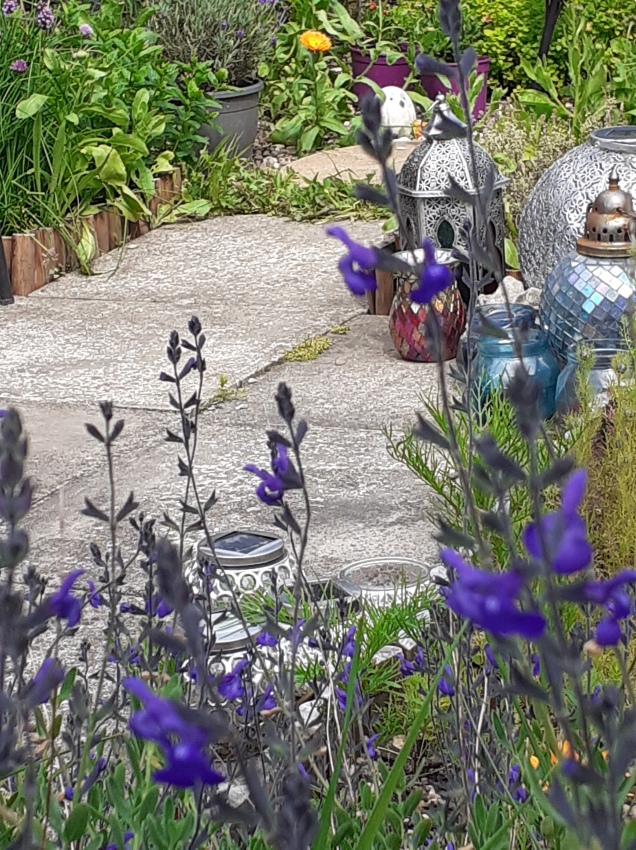 Back in May when we baked and sweltered in days on end of glorious sunshine it was said -only partly in jest – that this was summer so enjoy it while it lasted. It feels now like that was true. I can count on one hand the number of days in July when it hasn’t rained here in north west England. Grey, miserable, wet and even cold are not adjectives that normally are associated with summer, and the season has been hugely disappointing so far.

On a more positive note, wonderful things have been happening in the garden. When I last posted on the subject a few weeks ago everything was pastel and purple, which was lovely, but I was eager to see some bolder colours bursting forth. Well, burst forth they have, and they have been the perfect antidote to the wet and dreary days of late. This afternoon has been sunny and warm for a change so I sat outside with a book and a brew and Tiggy the cat for company.

In the spring when it became clear that garden centres would not be opening any time soon I decided to buy some seeds. Previous efforts at growing from scratch had, in the main, not been successful, but undeterred I bought a few packets from the supermarket and I set about sowing. My biggest success story has been calendula.

These joyful yellow flowers have grown effortlessly and have been a surprise and a delight. I’ll definitely be growing them again next year 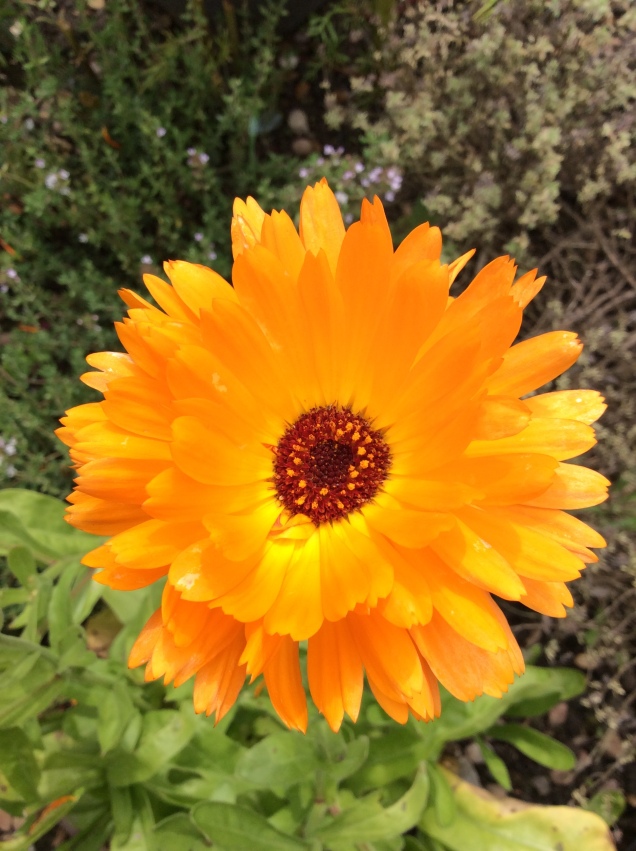 Their sunny faces always make me smile. The bees love them, too. 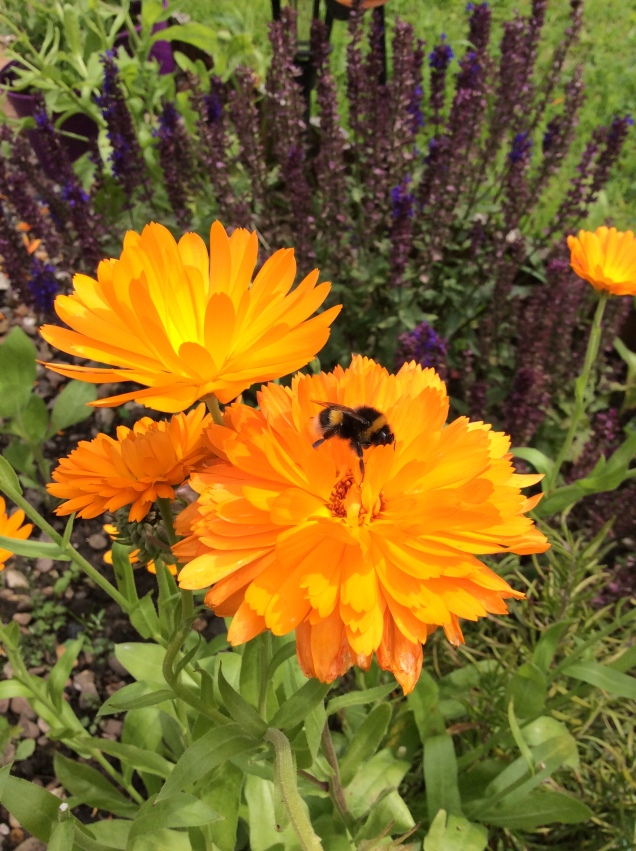 I sowed some seeds directly into the ground and planted others into plug cells, repotting a couple of times. There has been no difference in size or vitality. I even scattered a few randomly and they have grown just as well, including in the little herb bed where I’ve allowed some of the chives to flower for the insects to enjoy.

Nasturtiums have been another triumph. 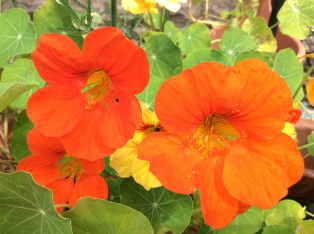 I sowed all of the seeds directly into pots, some with host plants such as winter jasmine which won’t flower until November, and mainly into old compost. Nasturtiums were the first of my seeds to shoot, and they continue to thrive. 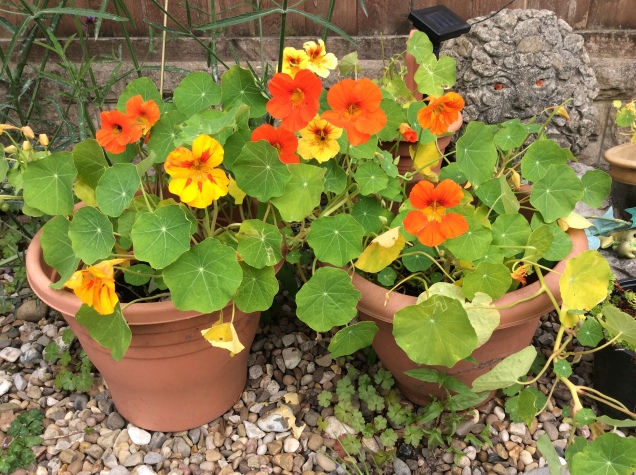 Like the calendula, nasturtiums are so joyful and sunny and their brightness is such a tonic. I’ve learned that they grow even better when planted into the ground so I’ll try that next year.

For the last three summers I have grown Nigella and have collected the seeds each autumn. They have not let me down this year either. They grow anywhere and everywhere in my garden; some have even returned where they were planted last year, even though they are supposed to be annuals. 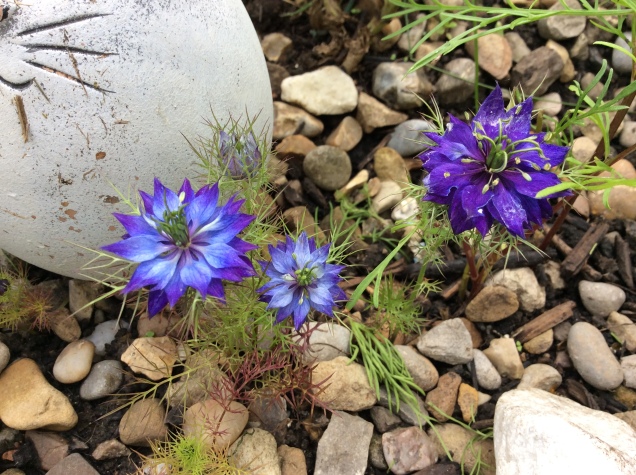 My poor little purple scabiosa always starts off well but no matter where I move it to it always withers as surrounding plants overshadow it. I have a plan to move it again. I was given a white scabiosa which seems fearless, standing proud, keeping the cat mint at bay and pulling in the bees. 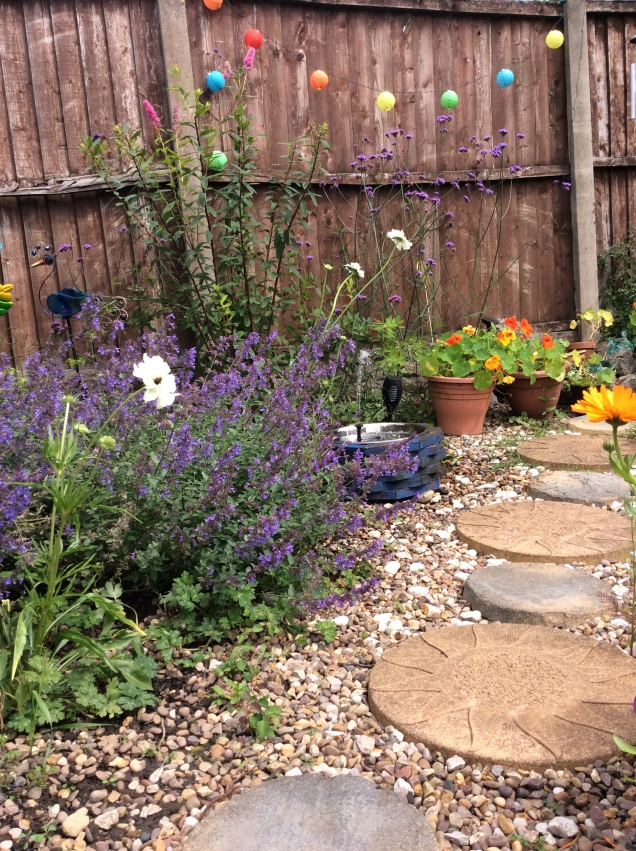 In February I dug up some roses which were in the wrong spot. They were spreading onto the little path and plucking my clothes whenever I walked past. I transferred them to very large pots and crossed my fingers. After a slow start, all have taken to their new homes.

This year has also been a time for making the most of what I already had. I divided a pot-bound and poorly-flowering fuchsia into three new plants, all of which are flourishing. 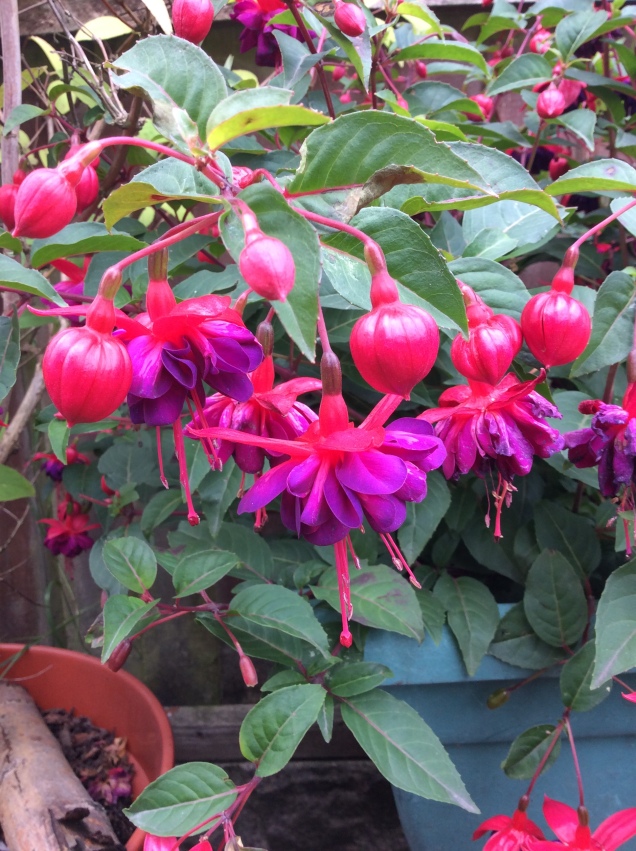 I adore the smell of caryopteris Heavenly Blue, another favourite with the bees. Planted about four years ago it has spread beyond the bed, but I just leave it.

The cat mint and banana mint are going strong and providing food for bees and butterflies.

I had hoped for another Painted Lady invasion like last year, but I’ve had very few butterfly visitors this year, sadly. When they do drop in they prefer the verbena like this tortoise shell. 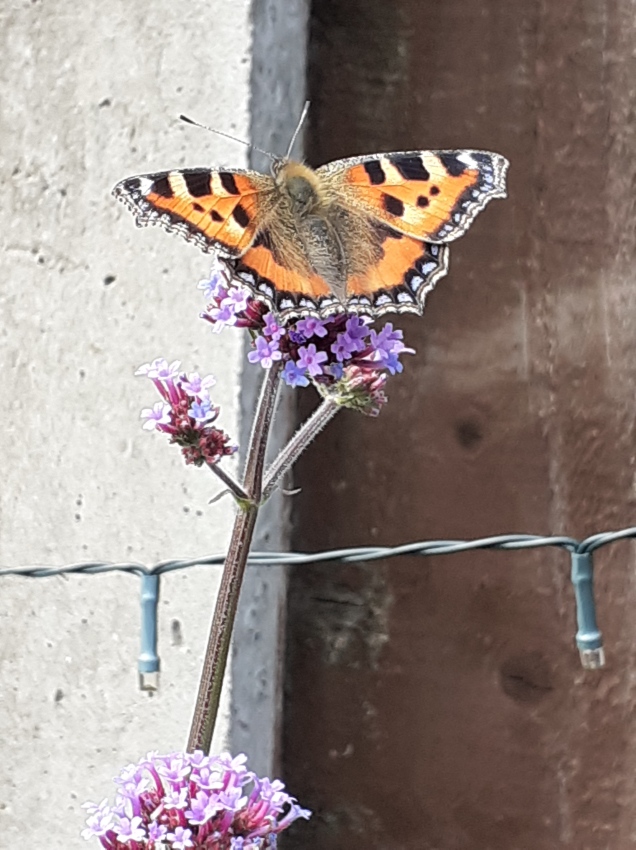 The Met Office has promised some proper summer weather tomorrow and especially on Friday so I’ll be out in my unruly little garden enjoying the bright and the beautiful. Happy days!

11 thoughts on “Bright and Beautiful”