Here in the UK we are into week 5 of lock down. People are responding to the situation in different ways. Some are coping well and are adjusting to a slower and simpler temporary life; others are struggling with confinement and  uncertainty about when things will change. I’m naturally a homebody and enjoy my own company, so thankfully I’m doing OK; though I am starting to lose track of what day it is and doubt I am alone in that. Sadly, there are no rural amblings to be had close to my home so I can’t show you any verdant spring scenes. I’m sure I’ll be itching to get out when restrictions are lifted, but as that could be some time off I thought I’d write a little retro travel post without having to leave the house.

Though not intentionally or philosophically a minimalist, I appear to own less stuff than most people I know and I tend only to have things that I actually use or am really fond of. In the second category is Montmarte Cat who sits on a shelf in the kitchen. I bought this ceramic feline about five years ago from my favourite part of Paris.

Montmartre is well known as the artists’ quarter of the French capital, a bustling and lively place with lots of winding cobbled streets, cafes, artists and little studios. Montmartre is actually the name of the hill but it incorporates the district which has grown up around it. 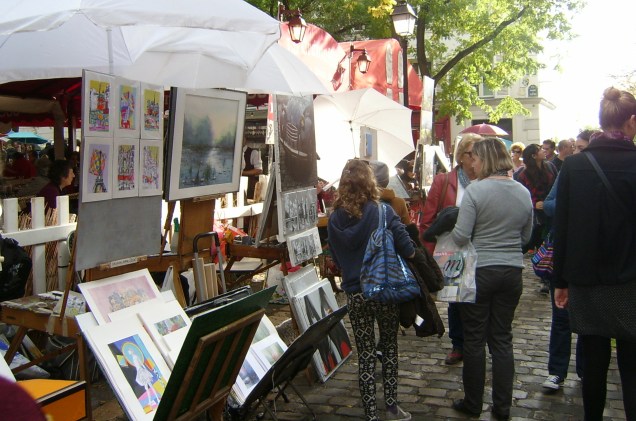 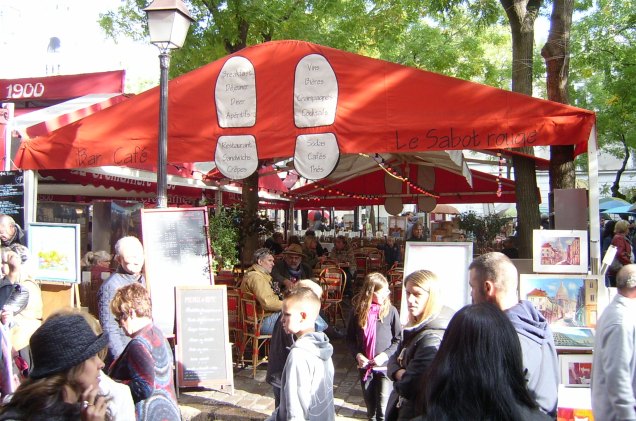 Walking around admiring street artists’ work is to be taken much more seriously than here in England. Stand too long in admiration and it’s assumed you have entered into an unspoken commercial contract to purchase the watercolour you have been ogling for the last seven minutes, or to pose for the portrait painter whom you have naively made eye contact with. Once those bristles hit that canvas there’s only one honourable outcome unless you want to make your escape, chastened and shamed, as the offended artist shouts insults after you. Just keep moving unless you want to buy, and enjoy the wonderful energy of the village.

Moulin Rouge is a just a short walk away but I haven’t been tempted. One of my two favourite views of the city can be savoured from the Basilica of Sacre Coeur which sits atop Montmartre (the other favourite view, perhaps unsurprisingly, being from the top of the Eiffel Tower).

Each time I have visited has been a warm and bright day, perfect for buying a freshly made baguette and walking up the steps of Sacre Coeur to sit and enjoy the sprawling metropolis below.

Of course, there are the usual hawkers and pick-pockets and opportunists who can spot tourists a mile off; it’s a slice of life. There are also souvenir shops selling tat to those of us who can’t resist – my personal weakness is fridge magnets. Bill Bryson once admitted to the same (tat, not especially fridge magnets) so there’s no shame in it. Excellent coffee or a green fairy will soon have you feeling more sophisticated again. 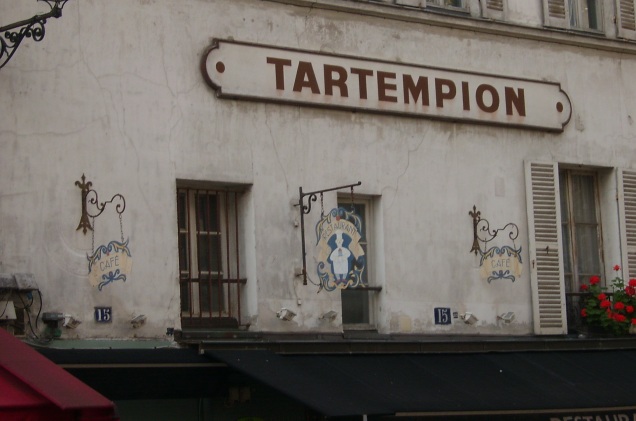 On my last visit five years ago I came across this gorgeous little ceramics studio.

The items on display outside were, understandably, glued in place but I was still impressed that they remained intact. I knew I was going to buy something… 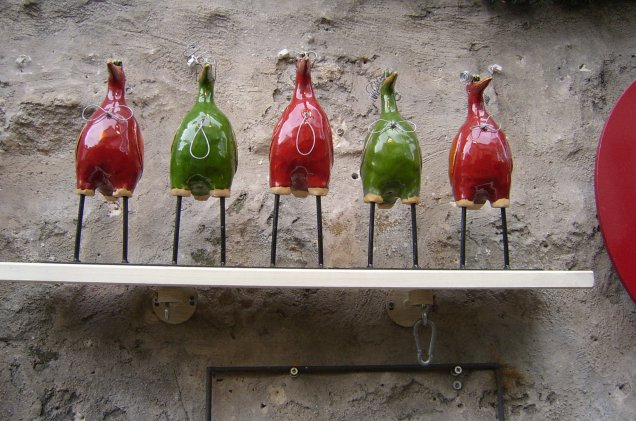 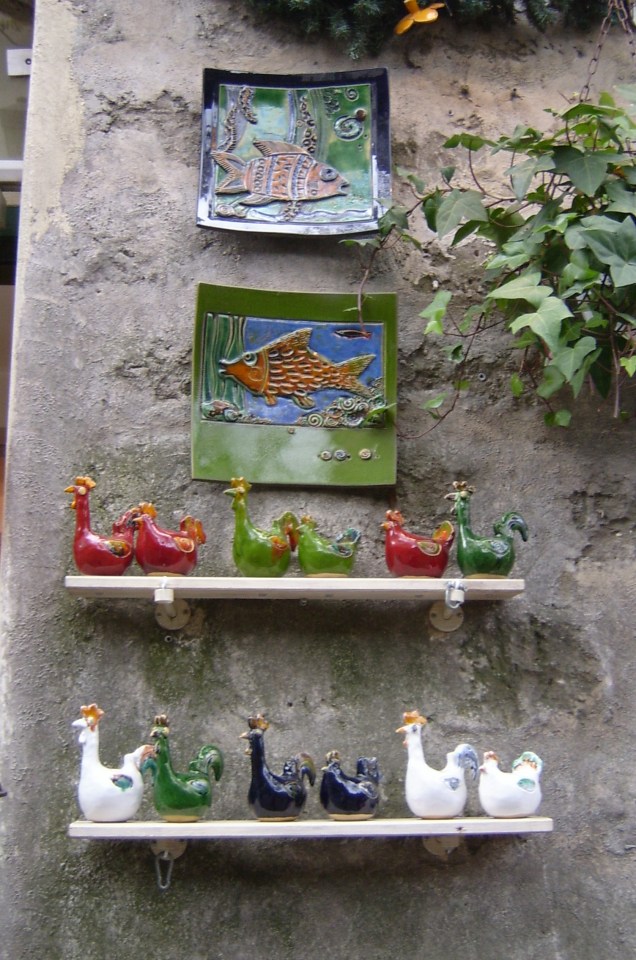 Not the handrail, though it was exquisitely painted.

Inside the tiny gallery there was a collection of cats in white and a rich olive green, singular and paired, reclining, sleeping, stretching, serious or smiling. One looked very pleased with himself, contented and lazy as cats should be, and as he has been since, on my kitchen shelf.

Keep smiling too! Planes will once again fly, ships will sail and adventures are awaiting.

Today is National Black Cats Day in the UK. The event is a Cats Protection initiative which was started in 2011 to promote the gorgeousness of black cats, and raise awareness of how they often lose out to their more colourful relations in finding homes and being loved.  I think it’s marvellous that our ebony felines have a day dedicated to them, not least because three of my own five kitties are black and beautiful.

Paddy, Pearl and Jasper had their 7th birthday in August but I still think of them as my kittens. Their mother, Cleopatra,  had moved herself into my home just a few weeks before they were born, with no small amount of encouragement from my son who had taken a shine to her and had (unknown to me) been providing treats and petting whenever she turned up in our garden. Cleo had been a neighbour’s cat but the kind-hearted lady had a lot of animals and not enough space or resources, and I guess that this precocious and savvy little tabby had been at the bottom of the pecking order.

After initially seeming offended that Cleo was spending so much time at my home, her former owner suddenly decided the cat had chosen us, so we should have her. Looking back, I think she’d twigged that some fur babies were on the way – not that I’m complaining.

Not being a seasoned cat midwife, it took a few weeks for it to become obvious to me that Cleo was pregnant – actually, about 3 weeks before the birth.  I was very apprehensive about the arrival of the kittens, caring for them and later finding them good homes. I had no intention of keeping them, as my life was busy and I felt my house was too small for so many cats.

It seemed fortunate that many family members, friends, acquaintances, friends of friends and work colleagues past and present were keen to become parents to the expected fur babies. I would not have let them go to anybody I didn’t know personally, and the question was, who would I have to disappoint? People had seen photos of the beautiful Cleo on Facebook or had met her in person and couldn’t wait to see her look-alike kittens.

August 1st is Lammas Day and, quite aptly, Cleo was delivered of a healthy harvest of 4 babies: three boys and one girl. Only one little boy was a tabby like her. The other three kittens were black. Mother and babies were doing well in the ‘nursery’ and I quickly became a cat baby bore. Very fortuitously, it was the summer holidays and I still had a few weeks off work in which to keep an eye on them.  I didn’t bestow names on my charges, as they were not going to be mine to keep. 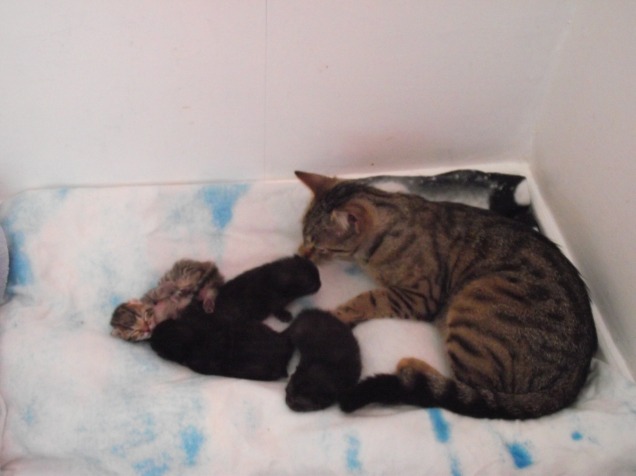 People were cooing and complimenting the photos, especially admiring the little male tabby. It was obvious that everybody liked him best and wanted to take him home when the time came. A few people even said they would take one of the others as well – as a companion – if they could have him. I was a bit sad about the lesser interest in the black kittens, but alarm bells hadn’t started to ring.

Just eight days after the birth, two of the babies developed Cat Flu. It came on very suddenly, overnight. Both were rushed to the vet for treatment; one survived and one did not. We lost the little tabby.

After that, I noticed a clear wane in interest in the other three cuties from previously very eager prospective adopters.

People still admired the photos, but almost all of those firm offers of homes became ‘maybes’:  changes in circumstances; possible trips to Australia; previously undetected allergies; clauses in tenancy agreements which forbade pets; concerns about traffic…. One person was quite honest and said that she just had a “penchant” for tabbies and another now thought she was too old to take on kittens which might outlive her, but then offered to take Cleo, their tabby mother, less than a year old herself.

By the time they were 8 or 9 weeks old, there were no suitable homes in place for my three kittens. I could have re-homed them had I been less fussy, but as the weeks passed I had started to feel very protective of them and had become very selective: I turned down a nice lady who lived on the 12th floor of a tower block (who I know would have spoilt a fur baby rotten) for fear of it escaping and falling over the balcony; I said no to someone who lived alone, worked long hours, and only wanted the very sociable and playful female kitten, even though she was quite attached to one of her brothers ( they don’t get along at all now!).

Cats Protection, who I’d contacted for advice, had even offered to collect them at 12 weeks. The lady  had explained that, very sadly, many people just weren’t interested in black cats, even kittens. It took them longer on average to find homes for ebony beauties who came into their care, as people preferred more colourful patterned cats. I read up on this and found that the same applied at all re-homing centres. In the USA, some shelters even euthanised black cats virtually as soon as they arrived, as they knew from experience that nobody would choose them.

Incredibly in the 21st century, my extensive reading informed me that occult connotations still lingered, along with superstitions associating black cats with bad luck, further adding to the ‘bad press’. Another unbelievable (but true) and probably the most feeble reason to me is that (in the age of social media), black cats are apparently not photogenic enough.

I became deeply offended on behalf of my kittens that they were deemed less desirable because of their colour. It’s true to say that my former good opinion of some people has never quite recovered since that time when I became aware of shallowness which I would never have suspected. That being said, my disappointment has been tempered by the realisation that I wouldn’t have the cats now had others been less fickle back then. 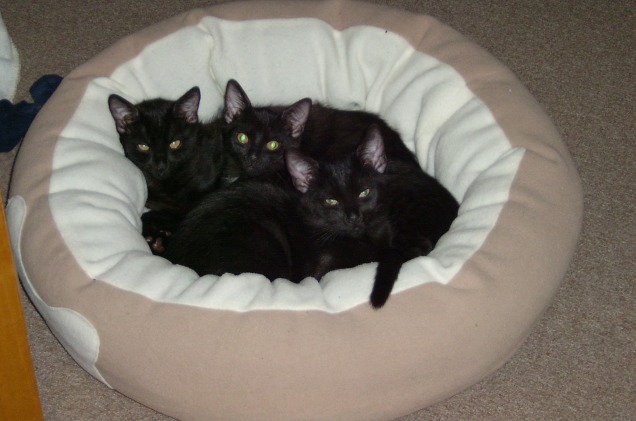 I made a decision: we named all three kittens and decided they would be staying with us, forever. There are quarrels and personality clashes, as each cat is very individual, but they are all a daily source of delight and entertainment; all affectionate and loving, at least to me, if not always to each other.

I have counted my blessings so many times, thankful that offers of homes which might not have turned out well did not in the end come through.

I hope that Black Cat Day helps raise the profile of dark beauties and helps people to see them for what they are: beautiful and magical. If you or somebody you know is considering welcoming a cat into your life and want to be on trend, according to Cats Protection: ‘Black is the new black.’ One thing’s for sure – you won’t be disappointed in your choice. 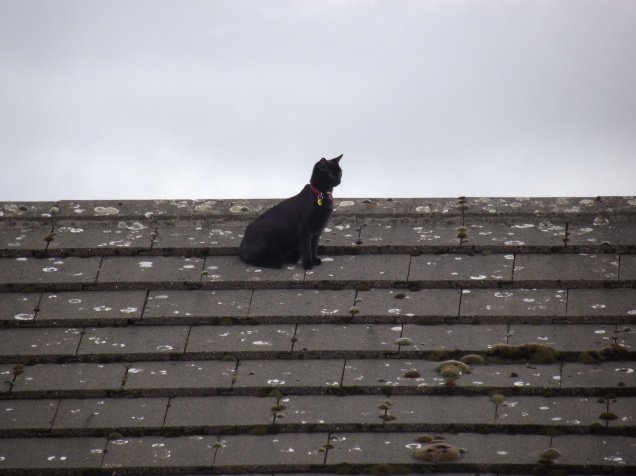