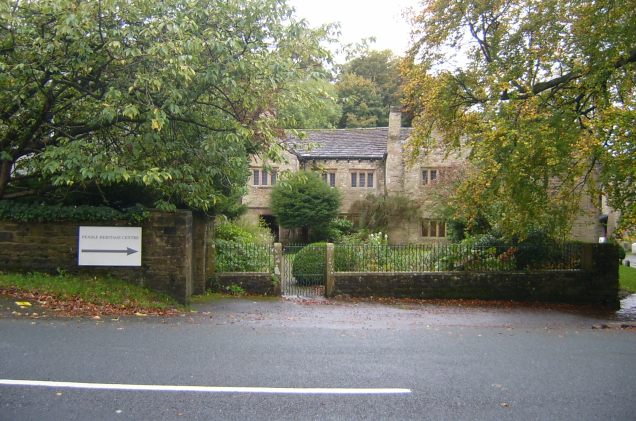 The village of Barrowford, the location of Pendle Heritage Centre, is in East Lancashire at the foot of Pendle Hill, a powerful brooding presence which dominates the landscape for miles around. It is about 150ft short of qualifying as a mountain. Pendle Hill is popular with hikers, especially those who have been captivated by the surrounding area and its dark history. Even on a glorious summer’s day, Pendle Hill has an eeriness about it; in grey October, as Halloween approaches and the nights draw in, the imagination can run riot.

OK, a little bit of history in a nutshell to set the scene………

The notorious Lancashire witch trials took place just over four hundred years ago in a turbulent time when religious suppression and fear of the supernatural were rife. In 1603, King James I (and VI of Scotland) came to the English throne. The new King was exceptionally superstitious, even for the time, and was obsessed with witchcraft, believing that attempts had been made on his own and his wife’s lives through the agency of black magic. His wife, Queen Anne, was from Denmark, which was in the grip of witchcraft mania. 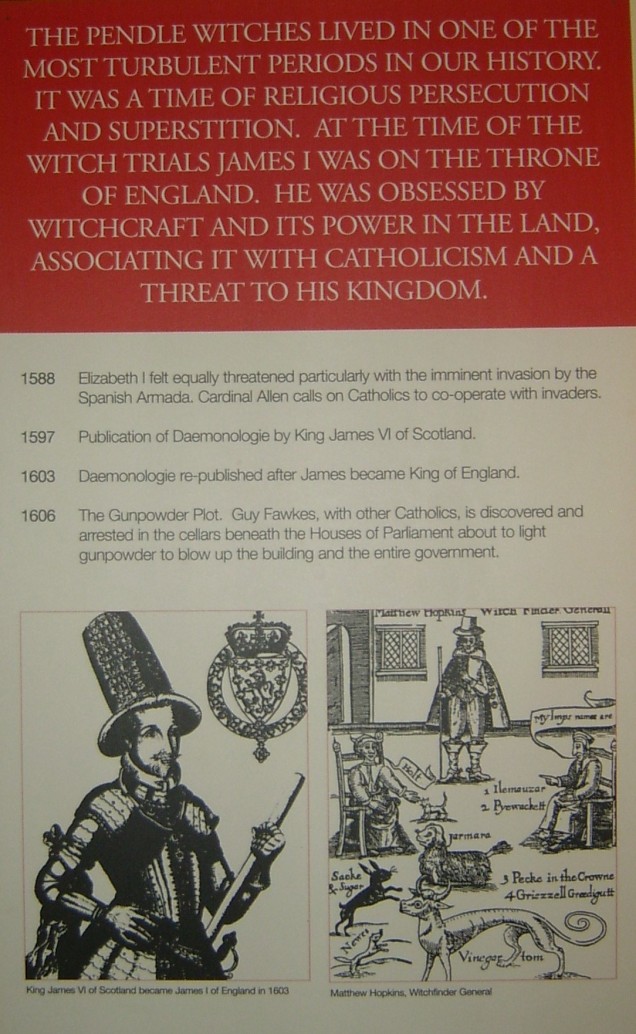 In addition to that of the occult, another fear weighed heavy on the King and Parliament: Roman Catholicism. The Protestant Reformation in England had begun about 75 years earlier, but during the reigns of King Henry VIII – the architect of reformation – and Queen Elizabeth I, there had been greater tolerance of ordinary Catholics who were still following ‘the old religion’ as long as they were very discreet, posed no threat and gave no offence to The Crown. Those times had gone, and the beginning of the 17th century brought with it a climate of fear and suspicion of English Catholics to the extent that they were regarded as enemies of the state; traitors who were seen as loyal to a faith which had at its head a foreign pope, not their own King. Practising as a Roman Catholic was considered to be an act of treason, and priests – when discovered – were punished by gruesome execution. Spies for the Crown were at large throughout society; all who adhered to this ‘foreign’ faith apparently posed a threat. Only seven years earlier Guy Fawkes and his associates had attempted to blow up parliament, an extreme act of rebellion against the oppression of Catholics.

Lancashire had the largest number of recusant Catholics in the country. Folk traditions were also still popular, and the people were considered to be less conforming than in many other regions. The trial of the witches of Pendle is one of the most famous in British history. It has been the subject of much academic analysis, and has been depicted in novels, films and TV programmes. A lot is known about the Pendle witches, though much is still open to debate and speculation. 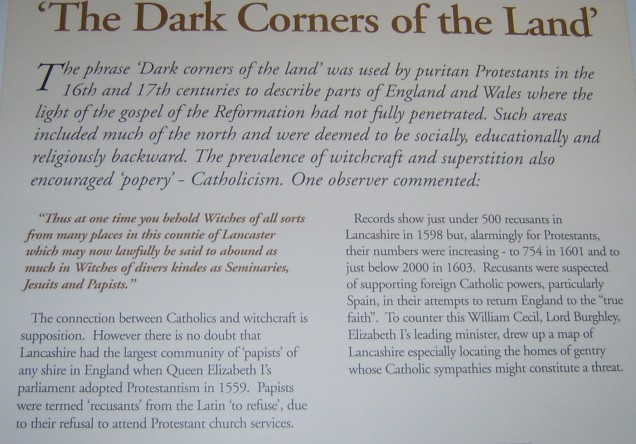 Pendle Heritage Centre is within a gorgeous Tudor building, Park Hill, formerly home of the wealthy and influential Bannister family. I was fascinated to discover that Sir Roger Bannister, the first person to run a mile in less than four minutes, descends from that same family. There has been a settlement on the site – farming and later textile production – since the 1200s. The present building was rescued and preserved by Heritage for the North West.

Entrance to Park Hill takes visitors past the first of a trail of tercet way markers commissioned to mark the 400th anniversary of the Lancashire Witch trials. There are ten in total and they are positioned along the 51 mile route which the accused followed on the route to Lancaster Castle where they were imprisoned and tried. Each way marker displays a stanza of the poem ‘The Lancashire Witches’ written by poet Laureate, Carole Ann Duffy. 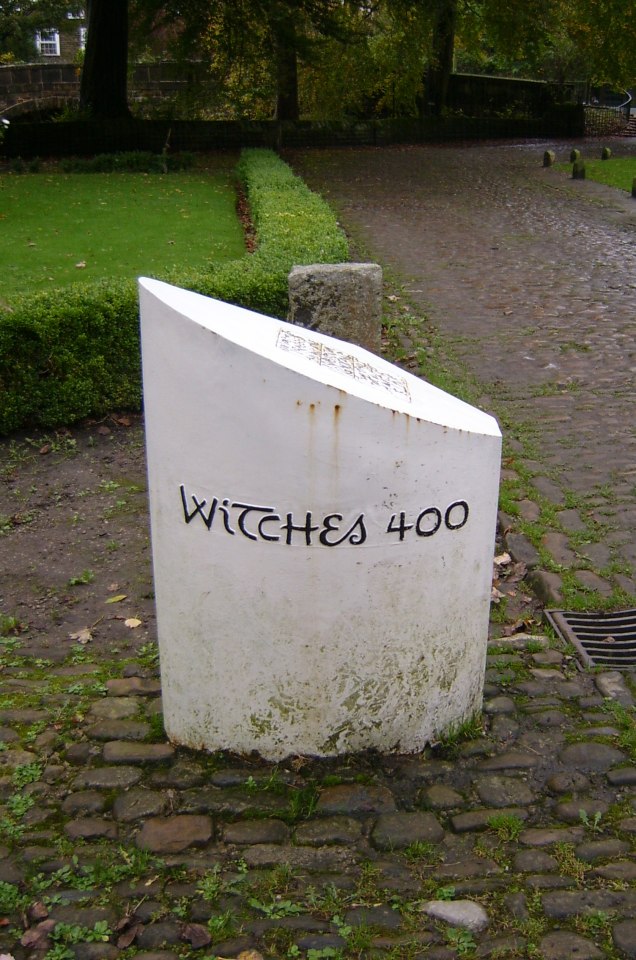 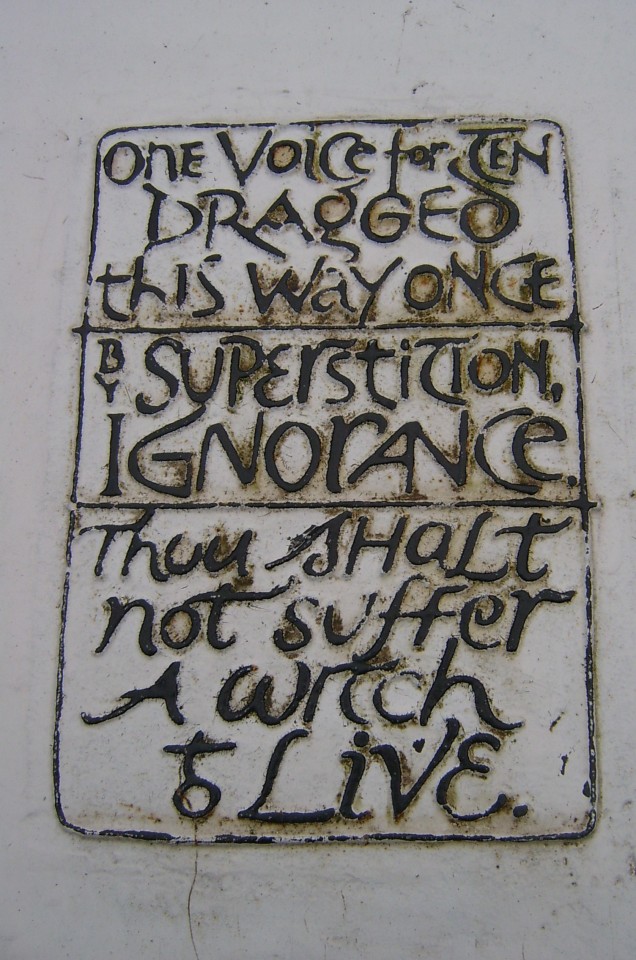 Admission is through a small reception area which offers the usual selection of leaflets, postcards etc. The nice lady behind the counter then showed me to an ancient-looking door which she invited me to pass through. I stepped into a paradox: the modern steel, glass and audio-visual displays that were the exhibition, housed in the remains of a dim, musty mediaeval building, complete with crumbled stone walls and the smell of damp. This combination of ancient and contemporary was slightly unsettling. Perfect! 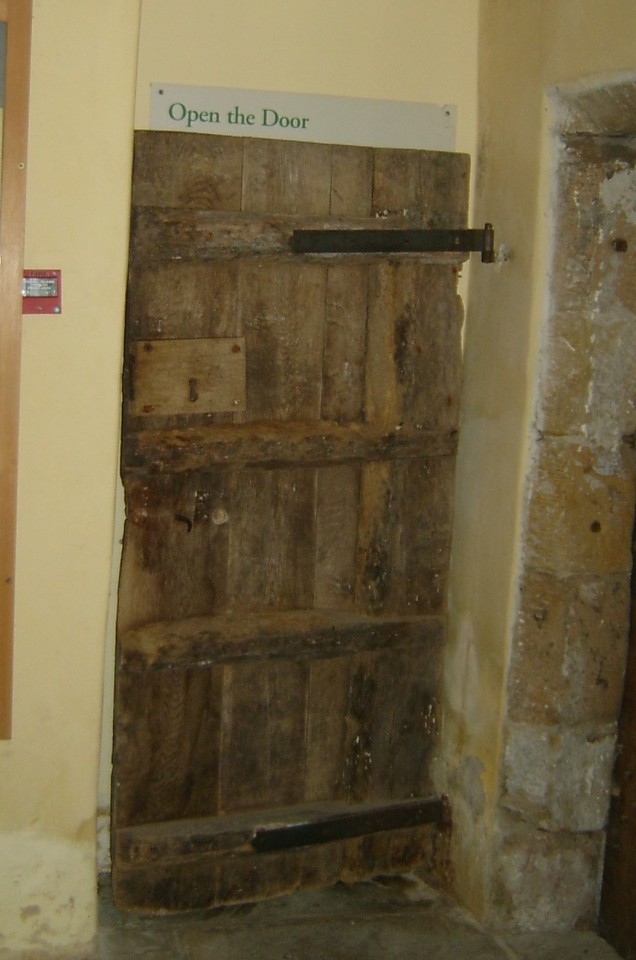 The history of Park Hill is told through displays and an audio recording which visitors activate by pressing a button. This continues as you make your way up the stairs to the next level. The early exhibits are about the Bannister family and the house, and include some examples of authentic 17th century household items. There is even a sitting room set up as it would have been about 400 years ago, though I felt that the dodgy mannequins with their rather comical wigs, in addition to the faux-flame pantomime-style fire detracted somewhat from the intended effect. This was all very interesting, and perhaps the topic of a future blog post, but the main interest of most visitors (including me), I suspect, is the next part of the exhibition, which is about the Pendle witches. 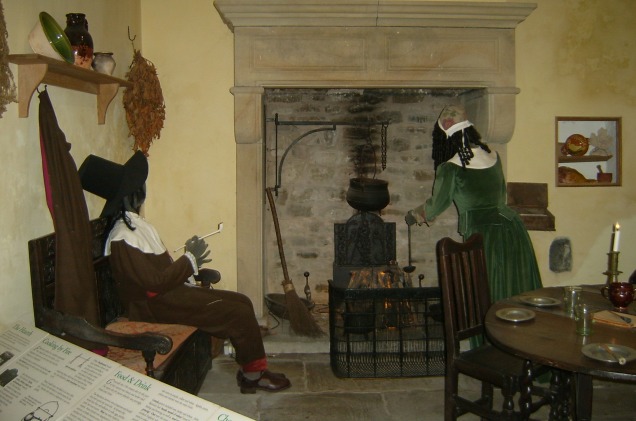 Next, I found myself in a tiny, dark room where there were three simple wooden benches, the front one occupied by a couple engrossed in a short film about the infamous witches. I don’t know if the siting of that auditorium was deliberate, or whether it was the only space left over once the displays had been placed, but it was spot on! Pitch black apart from the TV, and malodorous from the pervading dampness; closed-in and slightly unnerving, it was the perfect place to watch a film about dark arts.

The story of two feuding families, Chattox and Demdike, headed up by aged matriarchs who scraped a sort of living through begging, petty crime and perhaps a bit of ‘wise-woman’ healing over 400 years earlier, and their executions on a hill above Lancaster Castle is a complex one. It is a story about fear of women who were unmarried and outspoken; about the interpretation of mental health conditions, learning difficulties and dementia through the supernatural explanations prevalent at the time. It is also a story about the melding of ancient folk lore and remnants of old Catholic practices which still lingered in rural Lancashire at a time when both were feared, the latter considered a threat to King and country. Ambitious, powerful men, out to gain the King’s favour, found convenient offerings in Pendle. It is a story about scapegoats. 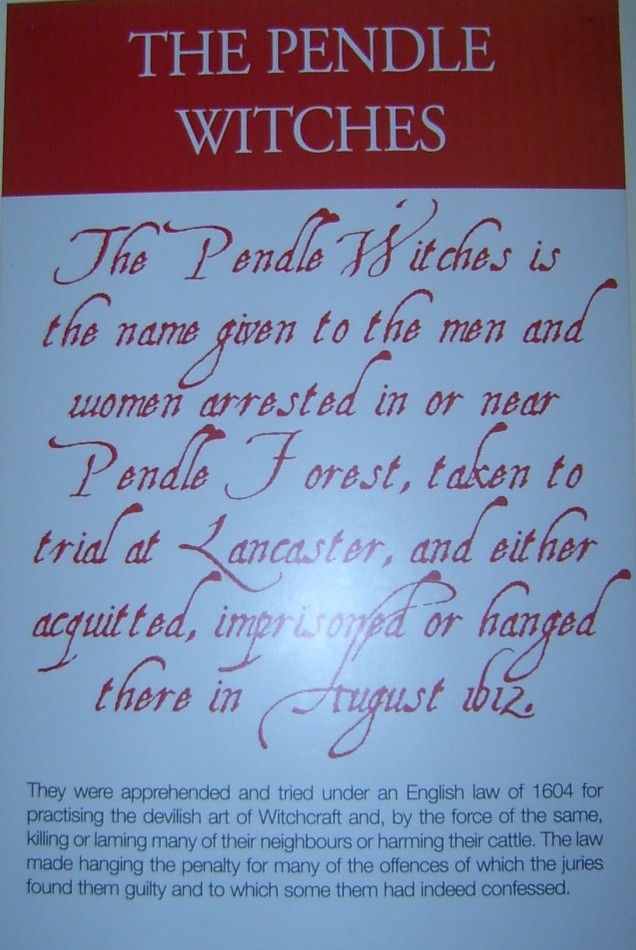 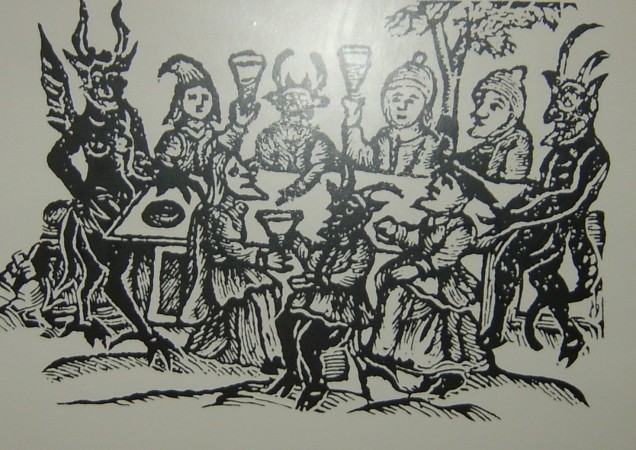 Undoubtedly, some of those accused were involved in the practice of casting spells; there is evidence of that. More about that next time!

The warmth, light and delectable aromas of the Heritage restaurant downstairs was a world apart from the exhibition area, and a welcome contrast. Home-cooked food is served every day except Christmas day and the restaurant is popular, not just with people visiting the exhibition. I enjoyed a cup of peppermint tea in a snug corner before stepping out into the traditional garden to appreciate the turning of the season. 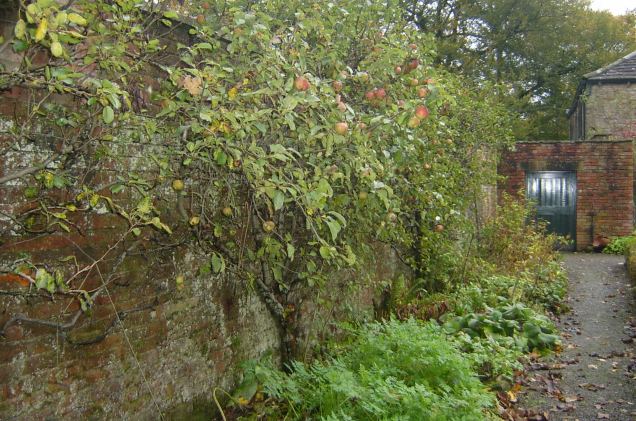 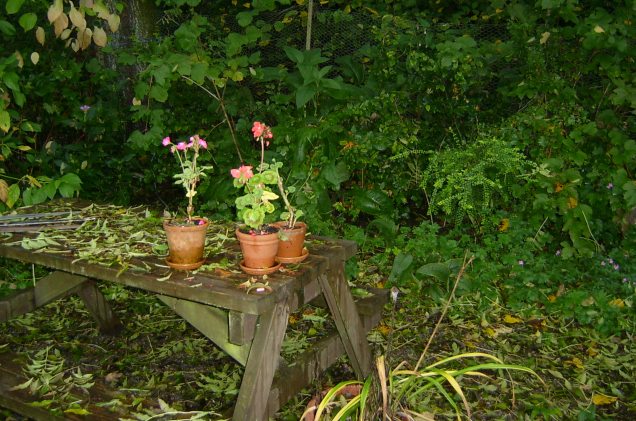 Pendle Heritage Centre is a smashing place to visit if you’re in the area. A couple of hours is enough time to spend there before exploring the other villages and hamlets that sit in the shadow of Pendle Hill along the ‘Witch Trail’. More witches, magic and nature will follow, so watch this space.