I recently made my first visit to the town of Halifax which sits high in the lovely Calderdale area of West Yorkshire. Halifax has been a centre of wool manufacture from the 15th century onward, its 19th century wealth arising from the cotton, wool and carpet industries. Like most other Yorkshire towns, Halifax had a large number of mills, many of which have been lost or converted for other uses. 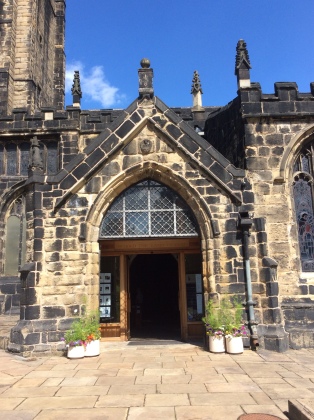 Minster Status was conferred on the 15th century Parish Church of St John the Baptist in 2009. I recommend a look if you visit the town. There is a lovely team of knowledgeable and enthusiastic volunteers and it was refreshing to be ‘loaned’ an information leaflet that I could read and give back or decide to buy for a couple of pounds. I particularly liked the Commonwealth windows, added in the 17th century to replace the ornate coloured glass banned by Oliver Cromwell. I think this simple design is just as attractive, if not more so. 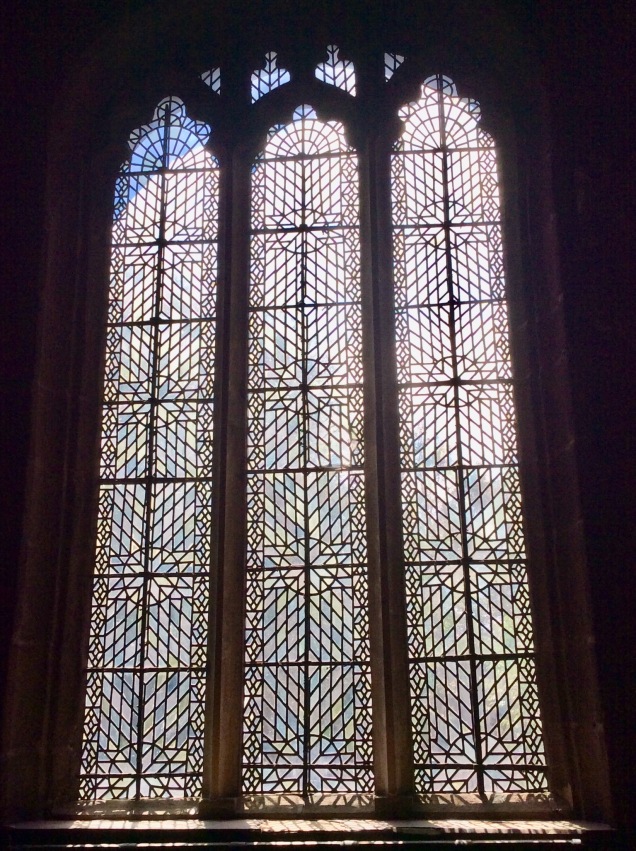 Another feature is the Jacobean box pews. Many churches from the same period still have these, but they tend to be fewer in number and towards the front, as they were often installed for the richer families of the parish to keep themselves apart from the poorer congregation. Here, all the pews are of this same design which is less common.

Inside the porch is the broken headstone from the grave of Anne Lister, a member of one of Halifax’s prominent families who died in 1840.

You can read my post about her remarkable life at beautiful Shibden Hall here .

Halifax is the home of Rowntree Mackintosh (now owned by Nestle) manufacturers of sweets and chocolates. Founder, John Mackintosh, was a local man whose first shop was in the town centre where his wife, Violet, formulated the recipe for their famous toffee. The town is also the home of the Halifax Building Society. Halifax boasts a long list of famous former residents which includes: John Christie -murderer and necrophile later of 10, Rillington Place, London; Shirley Crabtree, better-known as the wrestler, Big Daddy; the marvellous John Noakes of Blue Peter; Percy Shaw, inventor of Cats’ Eyes and singer/song-writer, Ed Sheeran, though he moved south at an early age. I was surprised at the size and bustle of the town which offers a lot to explore, but on this occasion my destination was the historic Piece Hall. 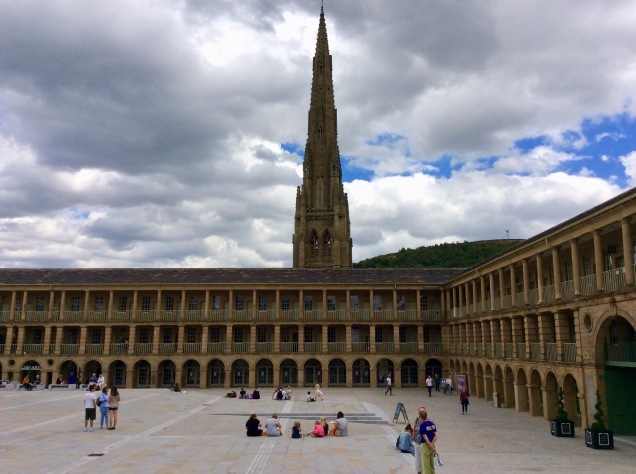 Halifax’s Piece Hall is where ‘pieces’ of woollen cloth were traded by hand-loom weavers during the 18th and 19th centuries. It opened its gates in 1779 with trading taking place every Saturday morning in a total of 315 merchant trading rooms where producers and buyers would gather. The Piece Hall later became a public market after the Industrial Revolution and the rise of the mills brought an end to the hand-loom cottage industry. After it started to fall into disrepair, a £19 million conservation and transformation programme began in 2015 to bring back the grade 1 listed building to its former glory. 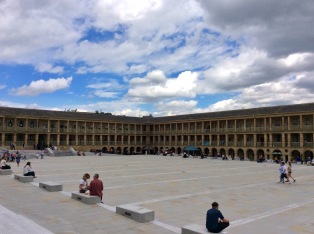 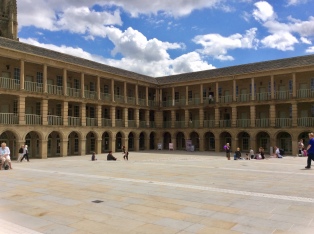 The building fully reopened on 1st August 2017 and is now the site of independent shops, cafes, arts and crafts galleries and a variety of events throughout the year. I was most impressed by the massive piazza which brought to mind more exotic locations. The expertly restored gates include a woolly clue to the original purpose of Halifax’s finest building baaaa none.

Blondin’s ice cream parlour offers a nod to the famous occasion in 1861 when internationally celebrated French performer, Charles Blondin, traversed the Piece Hall courtyard on a tight-rope. A gala festival – including tight-rope walking, obviously – will take place there on 15th September.

Next stop for me was the Piece Hall gallery to see the spectacular Transformations exhibition by artist Pamina Stewart who has created from ‘found’ seashells an array of mesmerising, mysterious and even menacing creatures, composed in exquisite detail and expressing, to me, an inherent inner-spirit and the seed of a suggestion that they may not always stand so perfectly still. The curator must have read my thoughts, adding that she often wondered what went on in there at night! 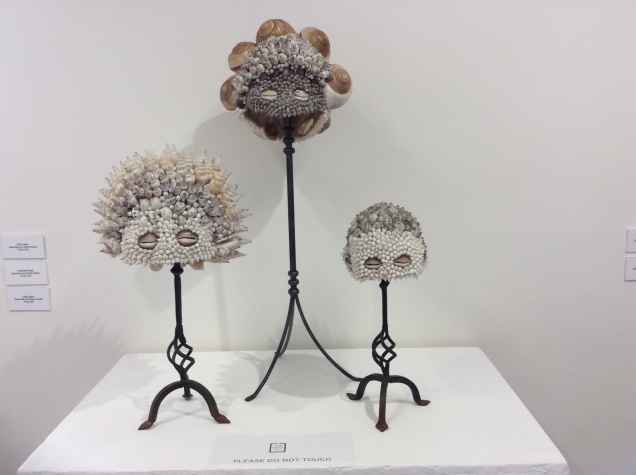 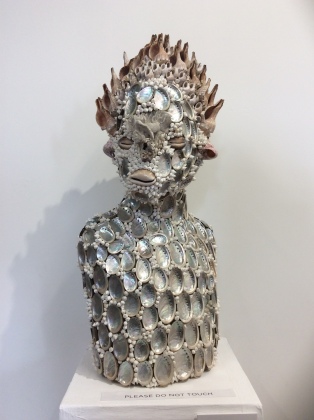 Pamina Stewart states that her intention is to ‘… take these discarded materials and give them a meaningful form’. I think she has certainly achieved that. 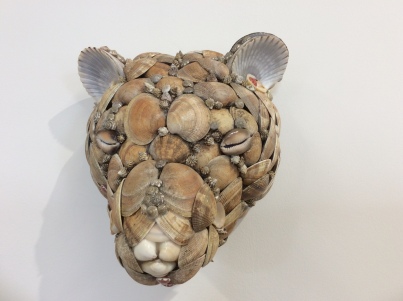 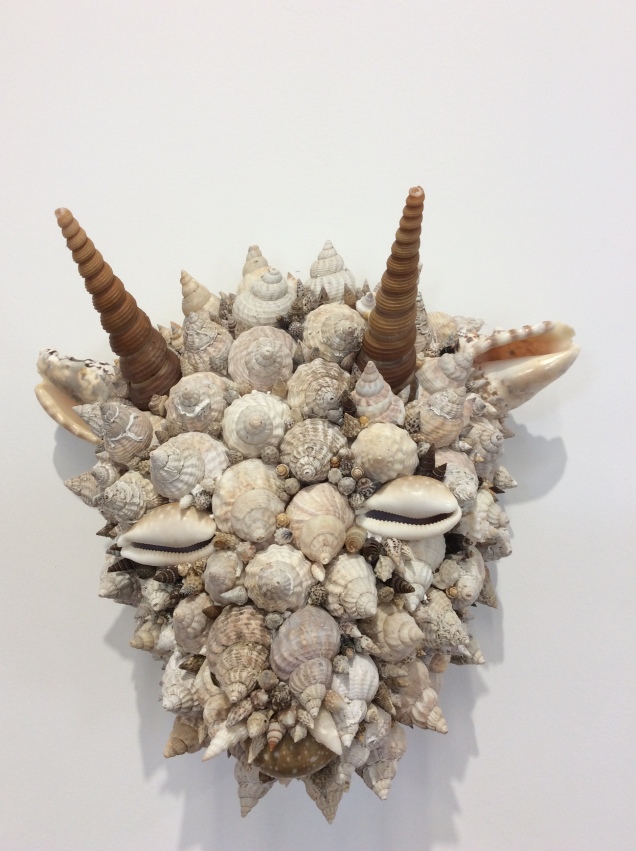 I resisted the temptation to shell out on a very expensive impulse buy but was delighted to learn that several pieces had been sold, one to an unnamed ‘celebrity’, perhaps one of the many connected to this interesting town.