Dutch bulb fields have, since the time of ‘tulip mania’ in the 17th century, attracted painters from Europe and beyond, mesmerised by vistas of flowers, row after row, vibrant and tantalising, extending like floral carpets to meet the horizon.

One of my favourite examples is Tulips in Holland by French Impressionist, Claude Monet, painted in 1886.

I am fascinated by the light and the vivid hues, and had pondered the reality and how it compared with Monet’s impressions as he set them to canvas in real time.

The Dutch tulip season is short, beginning in March and ending in May. A short visit to Holland’s southern bulb region last week presented the opportunity to feast my eyes on multitudes of magnificent blooms as Monet did on another spring day over 130 years ago.

The flat land and waterways reminded me of happy childhood holidays cruising on the Norfolk Broads with my family. They are early memories, set in time in a technicolour palette; our sensory perceptions of colour, smell, pain and sounds gradually fade as we grow older. I still remember the boldness of scarlet poppies against the parched East-Anglia fen land and vast sky. Of course, the two regions of England and Holland were once joined, back in the mists of time, so perhaps the connection is understandable.

The landscape changes from week to week as fields are harvested and return to barren soil, their glory days ended for another year.  Elsewhere, new flowers open to the sun as their moment arrives. 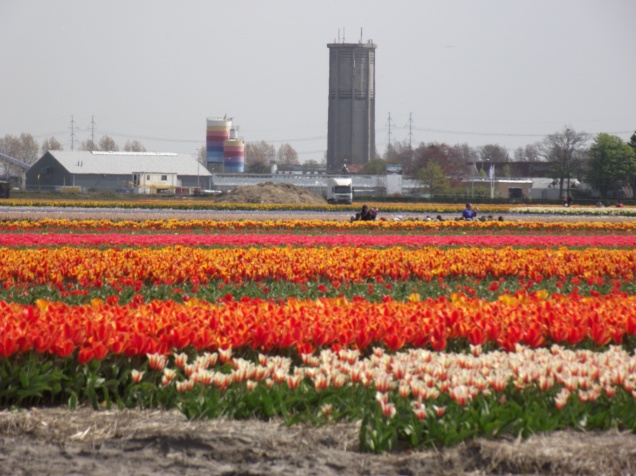 I ambled alongside one narrow canal which skirted several smaller fields. Views from the water’s edge offered a chance to see further and to form my solitary impressions.

My impression is of a grand artistic collaboration between nature and nurture at its triumphant moment of fruition, and that I was lucky to be in the gallery to see it for myself.

Two or three years ago my mum revealed that as a young woman she’d longed to visit Dutch tulip fields. She’s 77 now and although that long ago dream had never come true, she had still thought of it from time to time. Mum had never previously mentioned this ambition as she had thought it too difficult to realise. That’s not completely without foundation; tulips bloom for just a couple of months, mid-March to mid-May, so any visit would have to take place within a fairly tight window. Practically, I’m the only one of her children who could accompany mum on such an expedition, and I can only take holidays at certain times. This year the opportunity finally arose for us to visit the Netherlands during my Easter break. 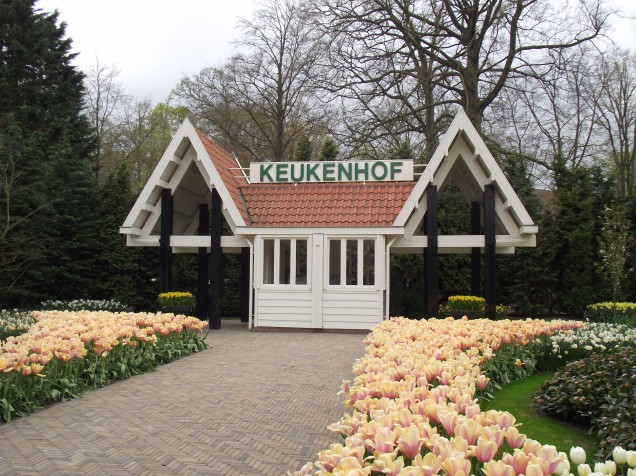 The Netherlands is famously the world’s largest exporter of flowers, and nowhere can the glory of Dutch flora be better experienced than at Keukenhof Gardens. Keukenhof is situated in Lisse in the bulb growing region of Holland to the south-west of Amsterdam. The 80 acre park was opened in 1950 as a site for growers from all over the Netherlands and elsewhere in Europe to exhibit their hybrids and help the Dutch export industry.

The land had formerly been a medieval hunting ground, and was used in part to provide herbs, fruit and vegetables for the kitchen of the land-owning Countess of Heinaut’s castle, hence the name Keukenhof, or ‘kitchen garden’. After the Countess’ death, the land was possessed by several very wealthy owners. Constantly expanding since the current park’s establishment,  it has become one of the largest flower gardens in Europe and attracts millions of visitors from all over the world.

Keukenhof opens its gates to visitors for only seven or eight weeks each year, so it can be very busy. It was wonderful to see so many awe-struck flower enthusiasts soaking up the April sun and the spectacular vistas. ‘Oohs’ and ‘Aahs’, I discovered, sound the same in all of the many languages I heard as we wound our way around the botanical wonderland. 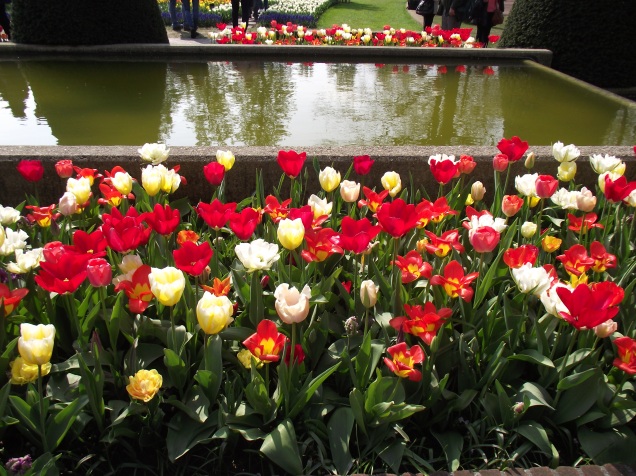 Carpets of tulips and hyacinths rolled out in glorious displays of colour and texture. 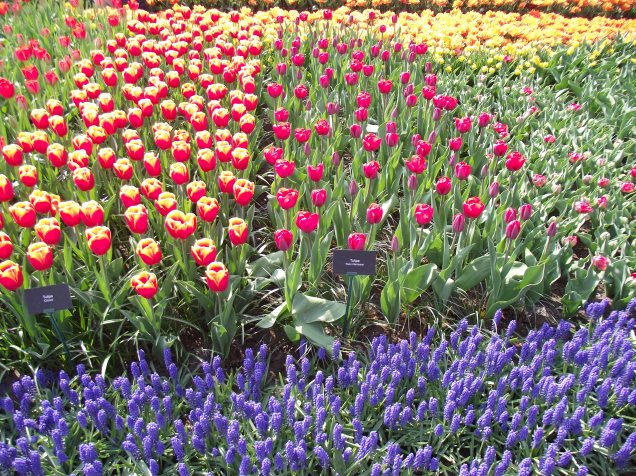 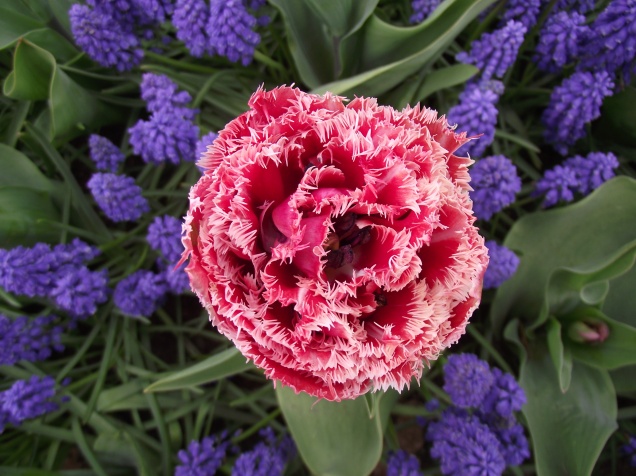 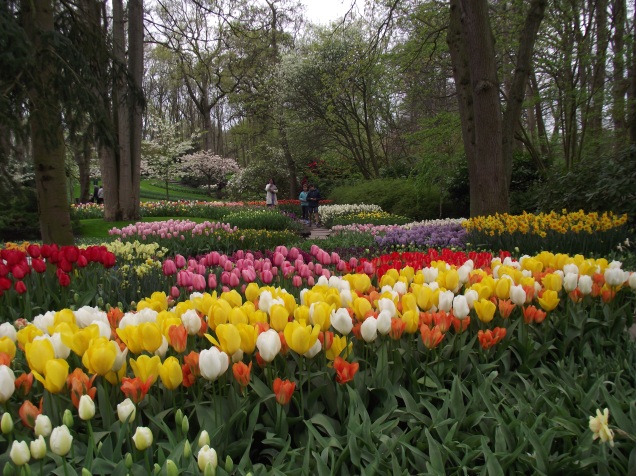 Each year Keukenhof has a theme, and in 2019 it is Flower-Power; a ’60s retro celebration of peace and love. Various exhibitions and installations appeared throughout the park; I particulary enjoyed the inspirarational peace garden. 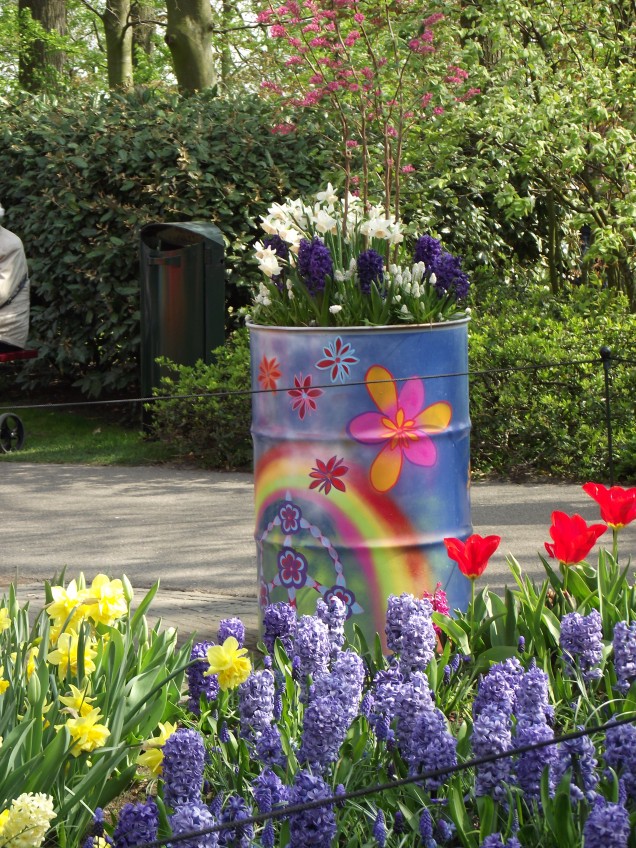 Many lakes and water features grace the park. Some provide quieter places to sit – as far as is possible at a popular site on this scale. 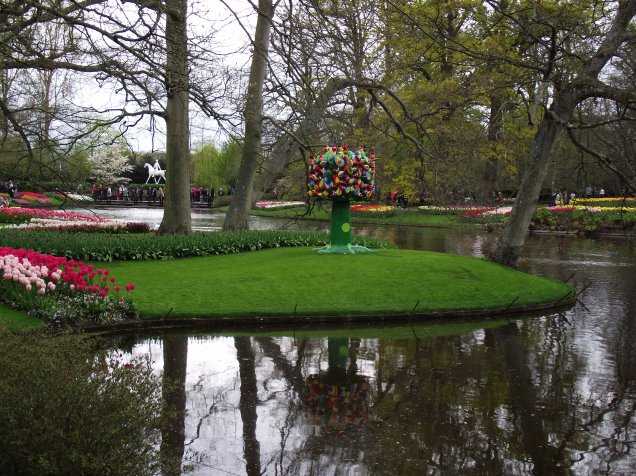 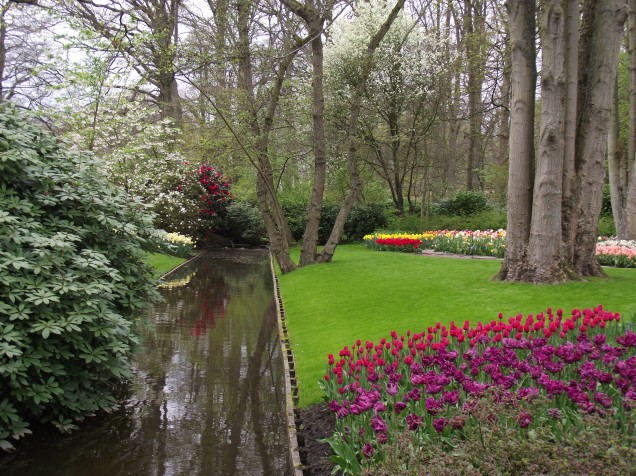 Keukenhof Gardens is roughly the size of 80 football (soccer) pitches, so a full day is needed if you want to see all of it. Of course, this necessitates stops for food and rest, all of which is catered for. There are two larger restaurant areas but these do become very busy at the obvious times. Other charming cafes offer delicious coffee and famous Dutch apple pie.

Everywhere is accessible for prams and wheelchairs, and there are lots of places to sit and take a break whilst enjoying the carnival of flowers. 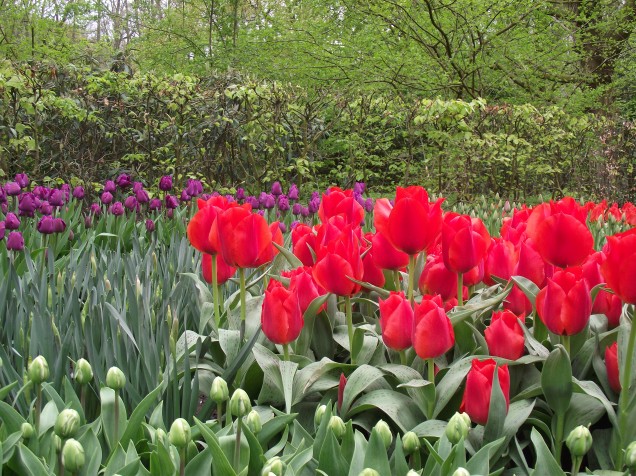 This is just a flavour of my visit to Keukenhof; a small selection of the delights for the senses. I have returned with a selection of bulbs for my own garden which – fingers crossed – will be a reminder when they flower of a special kitchen garden that I was able to share with my mum and make a dream come true. 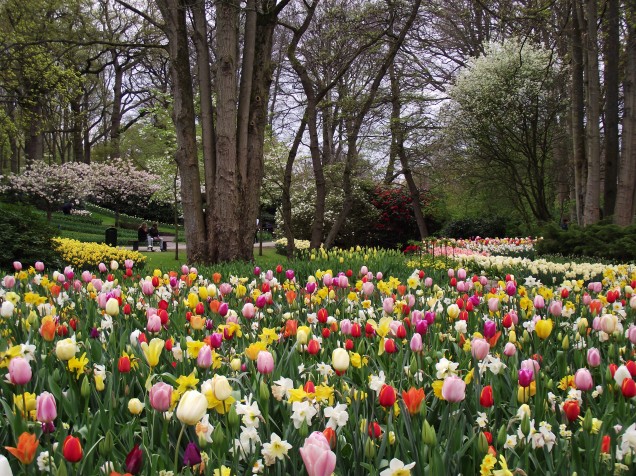 I wish an enjoyable weekend to all, hopefully one that will include some beautiful flowers and sunshine.