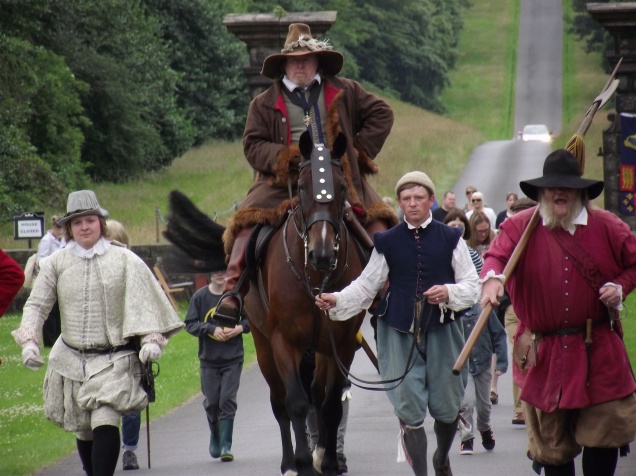 A horse and rider approach slowly along the impressive length of the driveway, flanked on both sides by other figures on foot. The king has returned. A buzz of excitement stirs through the crowd which has gathered in anticipation around the entrance to the outer courtyard. A trio of musicians stands poised, awaiting a signal to release the first notes from drum, pipe and horn. With the king just yards from the gateway the first beats and notes are heard and the assembled crowd starts to cheer its sovereign’s arrival. His majesty, King James VI of Scotland and I of England, clad in fur-trimmed riding cloak and tan leather boots surveys his awed subjects, there to welcome him to Hoghton Tower, the fortified manor on a Lancashire hill top where he will be the guest of Sir Richard for the next three days. The month is August; the year 1617.

Move the clock forward 400 years to a warm Sunday in July 2017 and to a special event being hosted at Hoghton Tower, the grade 1 listed ancestral home of the De Hoghton family. The original manor house dates back to Norman times, but the present building is 15th and 16th century and includes some 19th century renovations. Standing proudly atop an east Lancashire hill are the Tower’s turreted battlements, a show of strength against any would be Scottish invaders and harsh northern winds. 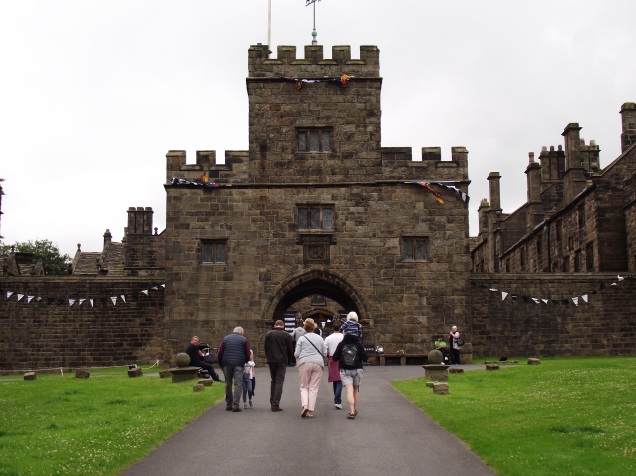 To celebrate the 400th anniversary of the King’s visit to Hoghton, a weekend of activities has been arranged. Events of this type also create much needed income for the upkeep of this grand building, still occupied by members of the De Hoghton family but legally owned by a charitable trust.

Once ushered into the courtyard, we – the peasants of the parish (as we were addressed) – took our places at the bottom of the steps leading up to a parapet where the De Hoghton family and other local worthies stood on ceremony waiting for the King to make his grand entrance. He did not disappoint. Riding gear removed and bedecked in more regal attire, King James met his public. It was all very light-hearted and we, the peasantry, were further insulted due to our general pong and ragged and offensive appearance. 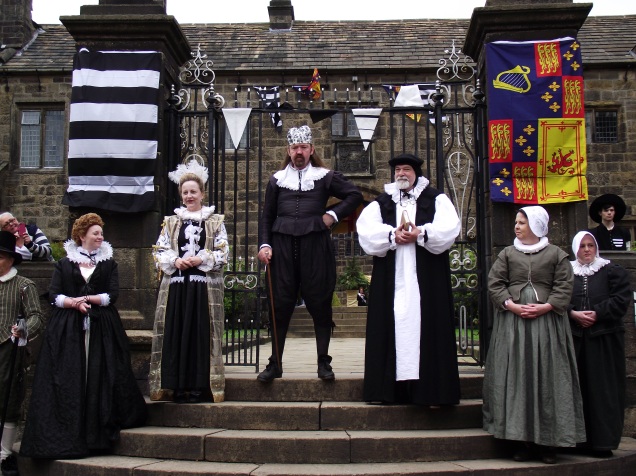 Apparently, in 1617 the King’s real appearance was somewhat different. It is recorded that he did not dismount in the courtyard, but rode his steed into the house and up a flight of stairs, rejecting the bedroom he was offered as he felt it posed a security threat. He rode along a landing to the furthest room which he decided would be his. Once safely inside and behind closed doors he eventually dismounted and the horse was taken back outside. The reason for this ……… at just 4ft 10 inches, the vertically challenged Majesty did not want people to realise how short he was when seeing him standing next to others. Part of the very brief (and poorly organised, it has to be said) tour of the house included a look at what has since been named the royal bedchamber.

From the courtyard, the stately entourage proceeded into the grand hall where the King held court. This was most amusing and members of the audience were invited to petition the Regent. Whilst His Royal Majesty was petitioned by the disgruntled but hopeful of the shire of Lancaster – including a Mistress Catherine of Blackburn who beseeched that His Majesty release her from paying a parking fine – the inner courtyard served as an outdoor stage for drama students from a local school who performed scenes selected from three of Shakespeare’s plays. A wonderful array of colourful costumes and some outstanding young players were an unexpected bonus. A couple of future stars of stage and screen may well have been present today.

Hoghton Tower has for years hosted performances of Shakespeare plays, which is apt, as the bard is reported to have stayed at the house in the 1580s and acted (no pun intended) as tutor to the De Hoghton children. There are other literary links to Hoghton Tower: Lewis Carroll’s great great grandmother, Lucy De Hoghton, resided there in the 1700s and Charles Dickens visited in 1854.

Today’s celebration marked the visit of King James I of England and VI of Scotland in August 1617 after being invited by Sir Richard to grace the manor with his presence. This first Stuart King of both England and Scotland, accompanied by a retinue of aristocrats and servants, was at the time on route to Scotland. He stayed at Hoghton for three days and during that time feasted at the most lavish banquets, the cost of which, it is said, led to Sir Richard becoming bankrupt for a time. Dressed in costumes from the era and fully entering into their parts, the ‘staff’ were keen to show us fascinated visitors the amazing display of authentic food which the King enjoyed during his stay. Due to the existence of the actual 400 year old menu, Stuart dishes both fair and foul had been prepared and set out for us to see; these included some delicious looking sweet wafer biscuits, a variety of tarts and pastries and a rather vile salad tossed in sugar – lots and lots of it! It was fascinating to have the opportunity to look at these examples of food from the time and I was surprised at how many things, such as a quiche, would not look out of place on a contemporary table. One well-known story which has its origins in this royal visit is the knighting of ‘Sir Loin’, a particularly delicious steak which had made its way from the De Hoghton estate farm onto the King’s platter. 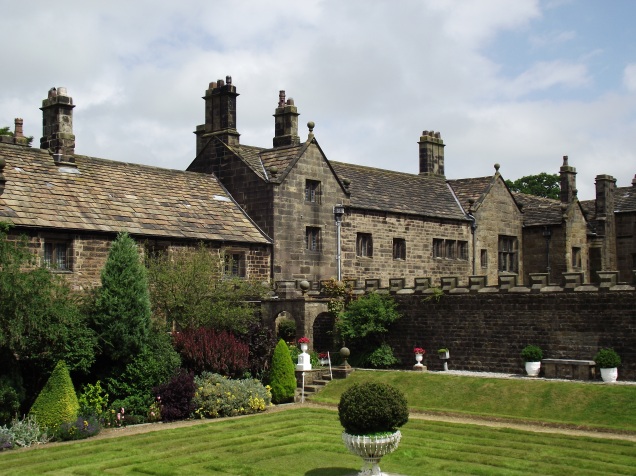 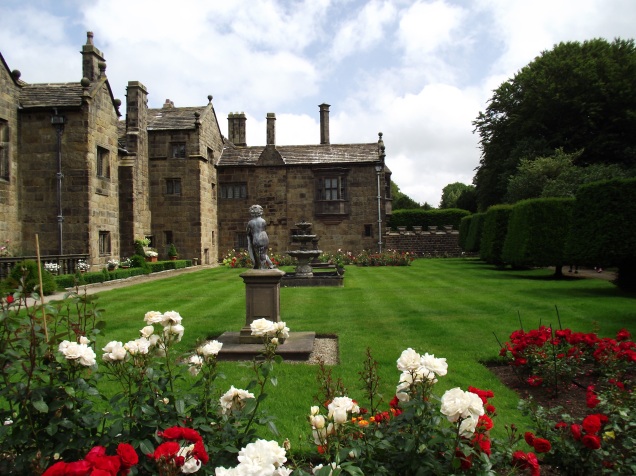 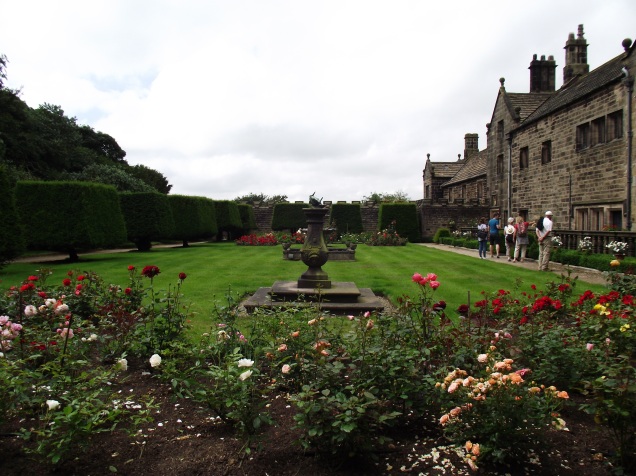 Hoghton Tower is surrounded by woodland and includes a working farm, but the estate gardens are small and ever so slightly disappointing. Some formal flower borders and a pretty rose garden are well-tended, whereas other areas appear to be less cared for; a water feature has been left unfinished, the black plastic lining open and thirsty for water. The farthest section of garden nearest the turrets at first appeared to have been subjected to an unfortunate mowing incident, but on closer inspection this seemed to be an attempt at a lawn maze, presumably for children, though there were signs (a lot of them, all over the place) instructing visitors to stay off the grass. We spotted through the trees another area, seemingly long-since abandoned and gone to seed. The upkeep costs of Hoghton probably prohibit the development of the outside as much as the family and trustees would like. That being said, an attractive and spacious lawn had become the focal point for some Jacobean games involving hoops and wooden posts and a small troupe of minstrels entertained with folk songs. 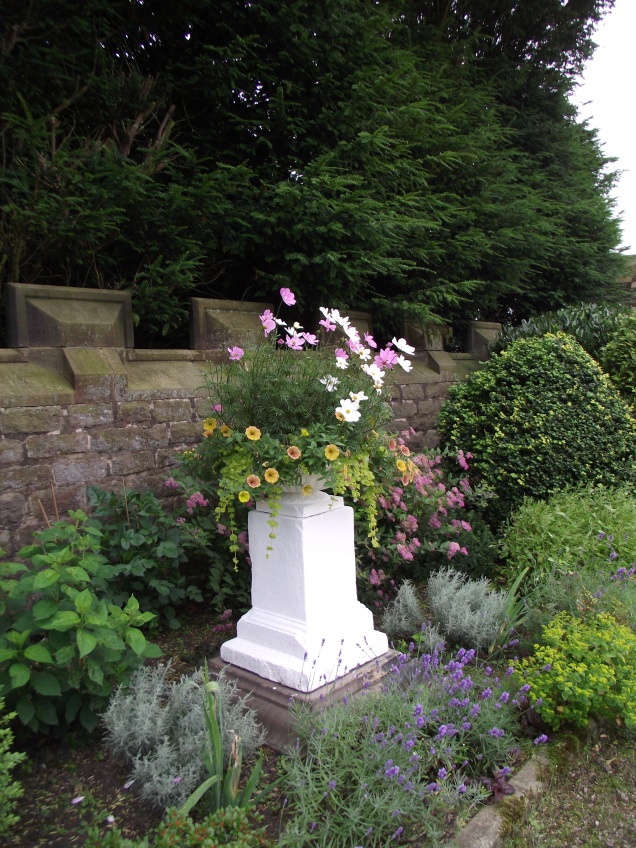 Hoghton Tower is reported to be one of the most haunted houses in England. A network of underground passages links back to the Lancashire witch trials which took place just five years before the King’s visit, and the house has its share of priest holes which were part of the subterfuge made necessary by the continued practice of the Catholic faith outlawed by King James and Queen Elizabeth I before him. Looking up towards the window of the royal bedchamber, I amused myself with a question: could the King have been worried about another kind of nocturnal visitor?

The present Baronet and his wife are lucky enough to still be in residence though nowadays only occupy one wing of the house, having signed the whole over to a charitable trust. Both are still active in estate life and the managing of events like this. Seventy-two year old Sir Bernard, whilst juggling the handing out of programmes and issuing instructions through the walkie-talkie, still found a few moments to ask if we had enjoyed our visit and chatted briefly about the building’s history and immense running costs. The walkie-talkie sprang once more into life just as another member of staff approached, so our conversation had to be curtailed. Polite to the end though clearly very busy, Sir Bernard thanked us again for coming. That’s what I call breeding.