The ruin of Sawley Abbey stands within the Forest of Bowland, an officially designated Area of Outstanding Natural Beauty in Lancashire. I may be biased because it’s my home county, but I believe it would be a tall order to find another region of England which has as much variety to offer visitors in terms of open rural landscapes, miles of exhilarating beaches, buildings of historical interest, quaint chocolate box villages and not forgetting bustling towns and cities. Anybody familiar with this neck of the woods doesn’t need an official label to point out the beauty of this part of the shire.

Situated close to the lovely town of Clitheroe, the Abbey was founded by a Cistercian order of monks in 1146 under the patronage of the extremely wealthy De Percy family of Northumberland. It was smaller than many of its contemporaries such as nearby Whalley Abbey  and Furness Abbey (link to my blog below). By all accounts the brothers of Sawley were not a happy bunch, complaining of poor crop yields and marshy land, and they didn’t reap the great material benefits enjoyed by many of their counterparts at other sites. Another gripe was that Sawley, due to being close to a busy road (nothing has changed there!), was an obvious resting place for travellers who had to be offered hospitality, this eating (pardon the pun) into the Abbey’s resources.

Like almost all Abbeys and monasteries in England and Wales, it was dissolved (torn down) in or just after 1536 when Henry VIII set up the Anglican Church and smashed – both metaphorically and literally – the Catholic Church in England. Many of these ruins are in the north of England. Most were not destroyed completely, as it was said that the King wanted people to see them, witness his power, and understand that he had authority, not Rome. Over time, much of the stone from these ancient sites was used by landowners and local people for new building projects.

The larger structures are long gone but visitors can still get an impression of the scale, stature and the space the Abbey occupied within its beautiful pastoral surroundings. It is now managed by English Heritage. No staff members are on site, but a local key holder opens and locks up daily. 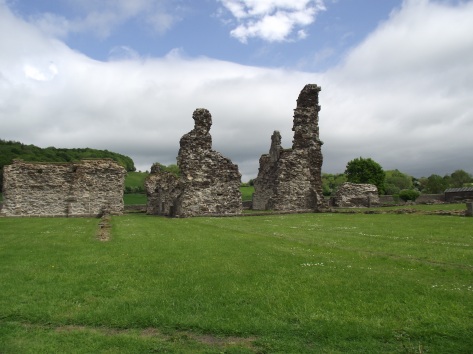 Nine centuries later, the ruin is still accessed via the extremely busy A59 road, and I can vouch that life and limb have to be risked when crossing. Visitors will also spot lots of four-wheel-drive vehicles pulling steel containers often crammed with sheep. This is the countryside, so it is to be expected, however I always find this upsetting and it is sure to cast a shadow over my day. Once the treacherous dual carriageway has been traversed, a side road leads to where lovely stone cottages line the short road up to the Abbey precinct. I didn’t take any photos of the desirable residences, as people were milling around outside and I thought it a bit rude to photograph them and their homes – and possibly a bit weird….or envious…. or all three.

A stone wall encloses the site and once inside I was fascinated to see some of the interesting architectural features displayed on natural stone shelves along one length of the perimeter.

Below are some well preserved sections of the original floor. Imagine the painstaking work involved in lining up all of those stone blocks! 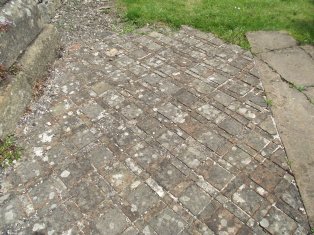 Although I was the only soul around for most of the hour or so I spent a Sawley, at one point a family with boisterous children entered. It seems that the site also doubles as a playground, unfortunately. I found a quiet nook where I could sit, relax, shiver a little despite the deceptive sunshine and enjoy the emergence of spring.